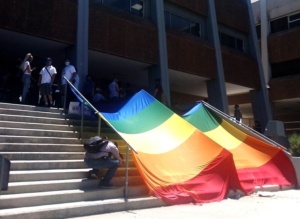 Mexicali, B.C.- In a session held on Thursday, July 17th, by the Congress of the State of Baja California, opinion 48 which seeks to recognize the union of same-sex people was rejected. There were 15 votes in favor, 7 abstentions, and 3 against it.

It took 17 votes to make same-sex marriages a reality in Baja California, however, they were not collected. Under the discourse that marriage is expressed in the Civil Code as the union between a man and a woman, in addition to the fact that the issue was not sufficiently analyzed, some Assemblymembers abstained from voting, thus ceasing to exercise the obligation to put themselves in for it or against it.

Some Assemblymembers, like Gerardo López’ from PRD, asked his church for forgiveness and voted in favor of same-sex marriage, adding that the above is a request from the Baja California society, in the same sense, Assemblymember Fausto Gallardo said he was in favor of strengthening and recognizing family in all its forms.

On the other hand, Assemblymember Eli Topete expressed: “Today this is a human right and a human right is not to be consulted, but to be recognized and respected, and because nobody is above the Supreme Court of Justice.”

Once this opinion was rejected, Assemblymember Miriam Cano said that such rejection represents a delay in terms of rights in Baja California.

Leaders and members of different LGBT groups met to give live follow-up to the virtual session, totally disagreeing with the results. With tears in their eyes, they expressed themselves against discriminatory actions.

As for the abstention of some Assemblymembers, they stated they’re unsure and they should have a clear position. In another sense, although it was not the expected result, it is a step forward because, in previous years, these kinds of requests could not even be considered by the plenary, as they commented.

Finally, LGBT activists said they will continue to work in an organized manner from their private activities so that the opinion can be returned to the Governance Commission.