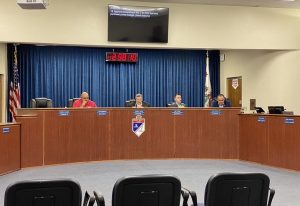 The Imperial Irrigation District Board of Directors heard a presentation about the Salton Sea Management Program at their Aug. 4 meeting.

The Salton Sea Management Program (SSMP) made significant progress in 2021. It broke ground on the largest restoration project in the Sea’s history, advanced with partners several other community-oriented restoration projects around the Sea, started important vegetation management work on the exposed lakebeds to reduce dust emissions, and secured commitment from state leaders for an additional $220 million in funding. This was made possible through partnerships with many other entities and by growing the SSMP Team, including several critical new hires.

Important progress was also made to advance programmatic permitting that will enable future work to happen more quickly. Outreach and engagement with local communities were strengthened so that local input can better shape the work of the SSMP. This included reinvigorating the Engagement Committee, re-establishing the Long-Range Planning Committee, and working to identify community amenities that residents prioritize along with working directly to address the shrinking Sea.

With an eye toward the future, the SSMP established an independent panel of experts to evaluate the feasibility of a range of proposals for water importation, which will inform the Long-Range Plan for the Salton Sea. This Long-Range Plan will be submitted to the State Water Board by the end of this year (2022).

Part of their accomplishments at the Salton Sea was to strengthen partnerships and engagement with the tribal governments, stakeholders, and local communities so that local input can better shape the work of the Salton Sea Management Plan. They have also completed over 1,200 acres of temporary dust control in 2020 and 2021, nearly 6,000 acres of major project work are now underway and an additional 8,000 acres of projects are planned through 2024.

In January 2021, broke ground on the largest restoration project in the Sea’s history, spanning an area of approximately 4,100 acres. They have also advanced with partners on several other community-oriented restoration projects around the Sea.

Another accomplishment is that they have started important vegetation enhancement work on the exposed lakebeds to suppress dust across 1/100 acres at the three sites in late 2021. They secured a commitment from state leaders for an additional $220 million in funding.

Important progress was made to advance programmatic permitting to enable future work under the 10-year plan to happen quickly. Started development of the Long-Range Plan, re-establish the Long-Range Planning Committee, and established an independent panel of experts to evaluate the feasibility of water implementation.

In a related action, the board approved IID electrical updates for the Salton Sea Species Conservation Habitat project.

The Species Conservation Habitat Project, located about eight miles northeast of Westmorland, California, aims to prevent further degradation of air quality and habitat at the Salton Sea by configuring a series of interconnected shallow ponds. The ponds will be created by constructing dikes at the north and south ends of the Salton Sea; the project size at build-out is expected to be approximately 2,400 acres, with construction taking place over several years. To provide electrical service to the project’s water pumping stations, the Imperial Irrigation District must upgrade the electrical distribution system service areas.

Therefore, as a responsible agency CEQA, IID must make findings regarding that portion of the project.

Construction is actively proceeding on the Species Conservation Habitat (SCH) project, the State’s first large-scale project to reduce exposed lakebeds and create environmental habitat at the Sea. The SCH project will create

as the Salton Sea recedes. The project will cover approximately 4,100 acres, an increase over

the previously estimated 3,770 acres due to an updated design.

of a causeway that will support a pump station to supply salt water to the project. In addition, interim dust control measures were implemented to stabilize approximately 500 acres of exposed lakebed within the SCH footprint following the Imperial County Air Pollution Control District (APCD) guidelines and the approved construction Dust Control Plan. This $206.5 million project, led by the design-build contractor Kiewit Infrastructure West Co., is located at the southern end of the Sea on both sides of the New River.

The SSMP Team continued its collaboration with the U.S. Bureau of Reclamation to develop projects on land within the planning areas identified in the 2020 Dust Suppression Action Plan. After securing state and federal permits as well as a land access agreement,

The SSMP Team also collected local seeds from around the Salton Sea and worked with botanists to grow and test plants that can tolerate salinity present in the region. The initial phase of work began at the Clubhouse site in late 2021, including the placement of straw bales to create conditions for plant growth and survivorship by reducing wind speeds and dust emissions from across the lakebed. Planting of native vegetation following this initial treatment is expected to start in March.