“Is Sake beer?” They ask me frequently.  “Sake is beer,” I always replied.

Many consider Sake “wine” and others call it “liquor”, however technically it is beer. On other occasions, we had the opportunity to talk about rice as an ingredient in many corporate beer brands such as Budweiser. The confusion becomes even greater when we note that many companies that import or produce Sake are priced as winemakers and very few as breweries.

What we in America know as Sake, the Japanese call Nihonshu. Sake is the generic name they give to any alcoholic beverage. The recipe to make it has remained practically the same for centuries. As a beer, Sake is the product of a fermentation process, although in this case, the process is much more complex than a European beer and is one of the most complex that exists. This is because the fermentation process of rice requires several additional stages to produce alcohol.

Rice, like barley or wheat, is a cereal, but because it is composed of starch, traditional yeasts cannot break it down so easily. The key to achieving this decomposition or fermentation lies in the use of certain fungi known as Aspergillus oryzate, which are closely related to Penicillin. Likewise, the type of rice suitable for making Sake is called Koji.

The manufacturing process is more or less like this: the Koji is peeled and polished to remove part of its outer layers, then soaked in cold water for about 18 hours, then drained and heated with steam for another 45 minutes. Then it is spread on a cloth to cool. The Aspergillus oryzate are sprinkled on the rice and these fungi are allowed to grow for two days, taking care to keep the environment warm to favor this growth.

After these steps, the Koji is ready to start producing Sake… just getting started?  In truth, the process is long since there are still three or four other stages left for the rice to be properly fermented. This complicated process results in a smooth and when unfiltered, milky drink with an alcohol content that fluctuates between 9% and 16%, much higher than that of ordinary beer. We also find some dry and others slightly sweet, there are even some to which a certain fruit flavor such as apple is added. 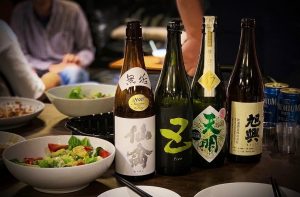 The best Sake in Japan is produced using the best rice that is produced in that country.  I’m talking about the main high-quality grain-producing region which is the Bizen-Omachi district and the Yamadanishiki district. Only the Sake produced with this rice has the right to be called Tamanohikari, manufactured entirely under the strictest traditional methods that include the use of 100% natural ingredients, 60% of the rice must be refined.

Sake manufacturing adheres to artisan techniques. The delicate balance between acidity and sweetness – say the Japanese – is not achieved with technology, but with the skill of experienced craftsmen who take care of the constant process in the subtle changes of climate, rice behavior, and water.

In Japan, the best season to drink Sake is spring, with the cherry trees in all their splendor and the scent of orange blossom in the air.  During the hot months, it is taken cold (hijazake) and in winter it can be taken warm or hot (atzukan). The occasions to taste it are varied, you can take it as an aperitif, as a digestive, as a companion to certain Japanese dishes, and even – in Japan – it is frequently used as part of spiritual ceremonies.

Sake is served in small ceramic or glass cups called Choko or Ochoko and the small vessels where it is placed are known as Tokkuri.  According to Japanese custom, the companion’s cup should always be served.

And you … What new beer did you try this week?  Dare to explore.