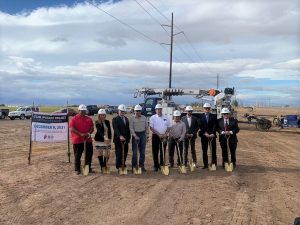 The groundbreaking of the S-Line in Seeley, California might have been surrounded by cold winds and gloomy weather but the excitement of this new project by county and IID officials was palpable and the project is officially underway.

“This is a very critical project for the Imperial Valley since we have looked at this project since 2007 so to me it is a great day to see this project rebuild and strengthen,” said IID Board President James Hanks said.

Imperial Irrigation District’s S-Line is an 18-mile 239 kV network transmission line connecting the Imperial Valley and El Centro Substations. The transmission line was placed into service in the late 1980s and is the primary path for import and export of power through IID and into the California and Arizona energy markets. The transmission line is an important component for maintaining a stable and reliable power supply to IID customers and the overall reliability of the Southern California energy grid.

“All these solar panels would be able to submit power to this line. There have been issues before I came on board and hope they can make it right and on budget, IID Director Javier Gonzalez said.

“The S-line is a needed project from a capacity standpoint, there will be 273 poles that will be replaced and that will be a great project for IID and its ratepayers,” IID Director Alex Cardenas said.

Citizens Energy, working with IID, will provide a portion of the funding for the upgrade project. Citizens have committed to furthering its to low-income customers by contributing one-half of its after-tax profits to fund programs and projects in IID’s service territory.

“As a partner of this project we will help the low-income community,” said Peter Smith, Chief Executive Officer of Citizens Energy. “We will invest 40 million of the total project cost and we will be turning a profit in our investment and we will help low-income ratepayers with their energy needs.”