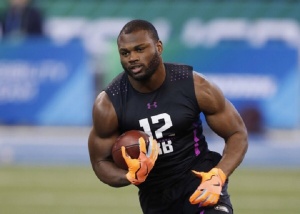 During Friday night football season a couple of years ago, Imperial Valley residents often heard of a very talented athlete that was key to the victory of the Imperial High School football team in Imperial, California. This athlete was simply the best and his speed and agility in the field was something to watch. His talent and humble attitude made him a very special person and people close to him knew that one day Royce Freeman was going to make it to the National Football League.

During the 2018 NFL Draft, Royce Freeman was drafted by the Denver Broncos on the third round of picks at number 71. He will be using #37 in his Denver Bronco jersey when the NFL season begins. His journey to the NFL began by breaking records in high school and being a team player in the University of Oregon football team.

During his senior season, Freeman set three San Diego section career records for career rushing yards (7,606), Career rushing touchdowns (111), and career points scored (724). These accomplishments made him the number 8th best running back in the nation.

He was named the Pac-12 Offensive Rookie of the Year and a Freshman All-American with 1,365 yards and 18 touchdowns on the ground (16 receptions, 158 yards, one touchdown). Freeman redoubled his efforts as a sophomore, earning first-team All-Pac-12 honors (1,836 rush yards, 17 scores; 26 receptions, 348 yards, two touchdowns). But just as Oregon fell flat in 2016 with a 4-8 record, Freeman struggled throughout the season. He failed to get to 1,000 yards (945) and scored just nine times (seven in the first five games), but had a knee injury that restricted the explosiveness he had shown in previous years.

Freeman became the leading rusher in Oregon history thanks to talent, consistency and elite productivity. He has outstanding size and is a natural runner with good vision who could step into an early starter’s role — especially if teams believe he can handle third down snaps as well.