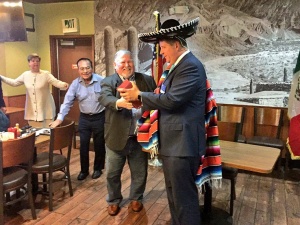 Governor Carr is a member of the San Diego Downtown Breakfast Rotary were he has served as President. Carr served in several roles within District 5340, including website chair, public relations chair, District Training Assembly chair, Chief of Staff to District Governor Louise Andres, and Assistant Governor. He is a member of the Paul Harris Society, and a multiple Paul Harris Fellow. He is also a member of the Millions For HOPE committee, which has raised over $30 million in bequests and direct contributions for the Rotary Foundation.

Governor Carr spoke to the Calexico Rotary Club about the “Why?” of being a Rotarian and how does being a member helps people in their communities and around the world. Governor Carr said that Rotary brings light to places that are in the dark thanks to their service efforts. He encouraged Calexico Rotary to look at their history and promoting it now that they approach their 100 anniversary.

“We were truly impressed with all of the individuals who threw their name into the hat for consideration,” said Scott Carr, District Governor. Each of the candidates interviewed by the Selection Committee were recommended by their respective Rotary clubs to serve as Governor. “The Selection Committee had some very difficult decisions to make, given the high caliber of candidates we had to consider,” Carr added. “I’d like to extend my congratulations to Marta for her selection, and my heartfelt appreciation to each and every one of the candidates who went through the process. I would also like to thank the Selection Committee and Chair Marilyn Sanderson for their hard work.”