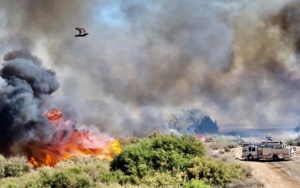 Thanks to the collaboration between the different county fire departments, a large fire was contained that affected a part of the unincorporated area Imperial County.

Imperial Valley and Mexicali residents saw Monday evening a big fire that spread its contamination around the area.

The Imperial County Fire Department and Office of Emergency Services engaged in a river bottom fire at Clark road and Kubler road West of Heber.

Salvador Flores, Deputy Imperial County Fire Chief said that the alarm 4 was activated in which fire engines from nearby cities were called to support the fire. At 11 p.m. and with the fire mostly contained.

“Crews will be there today and in the next couple of days so they can take off the full containment of the affected area,” Deputy Chief Flores said.

Flores said few plumes of smoke columns will be seen through the day as pockets of vegetation continue to burn.

“These are anticipated and planned for they are within the burn containment zone then we will begin to gather an after-action assessment of the area affected,” Flores added.

There was no structural damage due to the fire. A house near the fire was evacuated due to the threat of the fire but was not affected and the owners were able to back to their home that night.

The cause of the fire is still under investigation.