Restoring The New River Is a Priority for Calexico 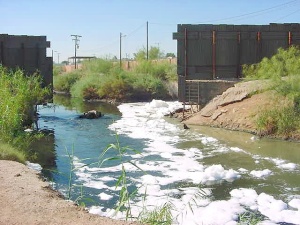 Residents living on the west side of Calexico have suffered the effects of the New River. That river flows between two countries has been one of the most complicated binational environmental problems that at times it seems that it didn’t have a solution.

Thankfully and with the collective efforts of the city of Calexico, residents, and other activists there is now a path to restore the New River once and for all.

The New River Improvement Project in Calexico will receive a total of $28 million to commence with clean-up; $18 million coming from the General Fund, and $10 million from Proposition 68.

The New River is a severely polluted waterway that flows north across the United States- Mexico border, through the city of Calexico, and continues to the Salton Sea, some 60 miles away. Though discharges from U.S. sources are treated and disinfected to meet state and federal standards, the water entering the country contains raw sewage, industrial, domestic and agricultural wastes, trash, and other solid pollutants, owing mostly to Mexicali’s overburdened and deteriorating infrastructure. This results in a serious threat to public health and ecosystems for wildlife and other biological resources while hindering economic development in the Imperial Valley.

To address the situation, the California-Mexico Border Relations Council (CMBRC) formed a committee in 2009 to develop a comprehensive plan. The original Strategic Plan for the New River Improvement Project, which was published in 2011, included a disinfection facility estimated to cost over $80 million. The project was amended in 2016 and instead features a pipe that encases the dirty water as it bypasses Calexico, preventing any direct or indirect contact, as well as an automated trash screen at the border to remove solid waste. These changes lowered the estimated cost of the project to $28 million.

The U.S. and Mexico acknowledged the water’s poor quality as far back as the 1940s, but took little action until 1980, and only after the situation had worsened due to the population boom and industrial development in Mexicali. The U.S. and Mexico sections of the International Boundary and Water Commission (IBWC) adopted a treaty that established water quality standards at the border and called for the elimination of Mexico’s raw sewage discharges by 1982. When these measures proved inadequate because of the crumbling sanitation systems, a series of “quick fix” emergency steps were implemented in various locations in Mexicali and included: An upgrade of the collection system that entailed lining or replacing existing sewer pipes; rehabilitation and improvement of pumping facilities that deliver wastewater to treatment facilities; and installation of backup power equipment. Subsequent projects featured the construction of a pumping plant, treatment facility and several collectors, and the installation of a pressure force main.

These $85 million projects – funded in part by the U.S. government and completed in 2007 – led to measurable water quality improvement and a stronger commitment from Mexico to regulate its discharges in Mexicali. The Regional Water Board’s most current data show bacteria have been reduced by about 10-fold and volatile organic compounds dropped below detection limits, reducing the overwhelming stench historically associated with the river. The progress notwithstanding, millions of gallons of raw sewage are still being released into the water as aging pumping plants, sewage pipes, and other equipment again need to be repaired or replaced. Additionally, the operation and maintenance of the infrastructure remain inconsistent.