Residence of former Governor Francisco Vega in Tijuana was searched 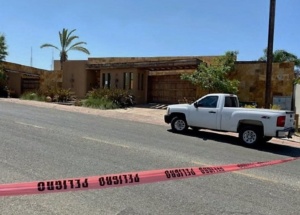 The Attorney General of the State of Baja California issued a search warrant at the address located in the Cumbres de Juárez subdivision, in the city of Tijuana, owned by former Governor Francisco Vega De la Madrid, in response to a complaint accusing him and his wife for having diverted public resources, which amount to more than 1600 million pesos.

At approximately 11:00 am, on Friday, May 8th, elements of the Prosecutor’s Office set up a fence around the property, as they entered the interior. The property valued at 5 million dollars, was empty at the time of the search, so it was unofficially said that both the wife and Francisco Vega himself, are very likely to be in one of their properties located in California, in San Diego County.

According to the FGE, the complaint filed includes documents that prove the issuance of false invoices named by companies shortly after having been registered, so the possible embezzlement for the amount of 1.2 billion pesos by the former governor is assumed, it would have been carried out through the Secretary of Finance, the Secretary of Social Development, among other agencies.

In the same way, a line of investigation is being followed towards his wife, Brenda Ruacho De Vega, since she’s being pointed out for irregularities in the management of the finances at DIF Baja California, which represents a deficit of almost 400 million pesos, declared by the secretary of state government, Amador Rodríguez Lozano.

This judicial order is carried out on crucial days for the current administration of Baja California, because the Supreme Court of Justice will be determining whether Jaime Bonilla Valdez’s current governorship extends until 2024, or ends in December 2021.