Requiem for a Psychopath Movie Wants to Create Awareness 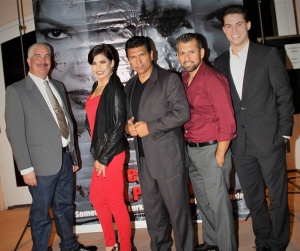 Roy Dorantes has a creative mind that always looks for a project that sends a positive message to the people. His most recent work “Requiem for a Psychopath” made its debut a few days ago at San Diego State University Imperial Valley Campus.

Requiem is Dorantes’ third film he produces in the valley after Respect Due and Killing Chavez. This movie took two years to complete since it was shot only on the weekends and there was extensive backstage production that went into completing this film.

The idea behind this movie is to promote crime awareness by identifying criminal behavior patterns.

As a journalist, Dorantes has covered crime and decided to research why people hurt each other. During his research, he came across the psychopath and how they act with no remorse towards their victim.

“We are trying to raise red flags on people that show criminal behavior and how to prevent it,” Dorantes said.

The next step for the movie is to go on tour and partner with agencies such as Womanhaven and Sure Helpline Crisis and spread the crime-awareness message throughout California.

There were approximately 200 people involved in this project that acted or were part of the production crew.

Charla Teethers, executive director of the Imperial Valley Film Commission, said to be happy that there are local productions like this one giving an opportunity to local talent.

“It’s exciting to see him (Dorantes) progress as a filmmaker and have people from the community come and participate and put themselves out there,” she said.