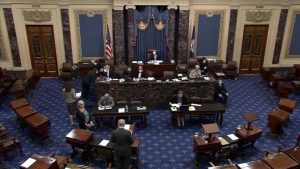 Washington Republicans are in an intense battle against Democrats as the debate passes the Domestic Terrorism Act.

The Domestic Terrorism Prevention Act is a proposed law that would create domestic terrorism offices within the Department of Homeland Security (DHS), the Department of Justice (DOJ), and the Federal Bureau of Investigation (FBI). In May 2022, the Act passed the House in a 222–203 vote, with only one Republican, Adam Kinzinger (IL), voting in favor of the Act. A previous version of the Act had passed unanimously in the House in September 2020. The 2022 version of the Act was proposed in response to the 2022 Buffalo shooting that was motivated by racism.

Republicans have opposed the 2022 version of the Act, comparing it to the recently paused Disinformation Governance Board (DGB) and saying that the Act could be used to censor conservatives with anti-government, anti-immigration, and anti-illegal immigration views.

American socialist magazine Jacobin argued that the Act could be used to target members of the political left since the Biden administration’s counter-terrorism strategy “makes no distinction based on political views” and says that domestic terrorists are motivated by a “range of ideologies” that includes animal rights, environmentalism, anarchism, and anti-capitalism.

Senate Majority Leader Chuck Schumer (D-NY)  spoke on the Senate floor regarding the clear contrast between MAGA Republicans and Democrats. Senator Schumer also announced a cloture vote this week on the motion to proceed to the Domestic Terrorism Prevention Act.

“This is what MAGA Republicans clamor for: a world ruled by conspiracy theories, national abortion bans, and the greatest curtailing of individual rights in fifty years.

A world where immigrants and communities of color are considered “replacers”, where women are considered second-class citizens and being told what to do with their bodies, where white supremacy is tolerated or even embraced, and where our democracy erodes in favor of autocracy. Imagine again, Orbán, the leading autocrat of Europe, being the lead speaker at CPAC, where President Trump and other major Republicans participated. Who would think we would see that day? Who would think?

We cannot let these views become accepted or even the norm in the United States. This week, we can take one step of many to help silence the voices of white supremacy, the voices of domestic terrorism.

So I implore my Republican colleagues: if you reject the dangers of white supremacy and view it as a white replacement, you should vote in favor of moving forward to begin debate on this domestic terrorism bill.

This is a test; this is about accountability. Republican Senators: do you reject the views of MAGA Republicans? Do you reject white supremacy and replacement theory?

Taking a stand against domestic terrorism and white supremacy should be the easiest thing in the world.

If Republicans can’t join us on something as simple as that, Americans will see with even greater clarity how radical the GOP has become under Donald Trump and MAGA Republicans.”