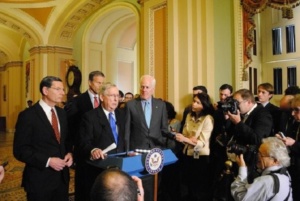 “Just like in March, with the CARES Act, Senate Republicans have authored another bold framework to help our nation… Health, Economic Assistance, Liability, and Schools. Another historic package for the next phase of this historic national fight,” Senate Majority Leader Mitch McConnell said.

McConnell called upon Democrats to take action soon and approve this proposal as soon as possible.

“The Senate will not waste time with pointless partisanship. There is a reason why even Speaker Pelosi and Leader Schumer themselves have publicly downplayed the multi-trillion-dollar socialist manifesto they published some weeks back, and have suggested the real, serious discussion would begin when Republicans released our outline,”

McConnell outlines other points in the bill, including $100 billion to help schools reopen and a sequel to Paycheck Protection Program (PPP) loans.

“So now, we need our Democratic colleagues to reprise their part as well. They need to put aside the partisan stonewalling we saw on police reform, rediscover the spirit of urgency that got the CARES Act across the finish line, and quickly join us around the negotiating table.” McConnell said.