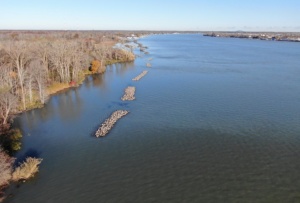 Washington, D.C.– Last Friday, Rep. Juan Vargas (CA-51), along with Reps. Davis (CA-53), Peters (CA-52), Ruiz (CA-36), and Levin (CA-49), introduced the Border Water Quality Restoration and Protection Act of 2020, a companion bill to Senator Dianne Feinstein’s (D-CA) legislation introduced on July 29, 2020. The legislation will address pollution along the U.S.-Mexico border and help improve the water quality of the Tijuana River and New River.  The bill will designate the Environmental Protection Agency (EPA) as the lead agency to coordinate all federal, state, and local agencies to plan and construct infrastructure projects to help combat pollution along the border.

“For decades, border communities in my district have been impacted by cross-border pollution.  Our bill will assign the EPA as the lead agency to ensure that restoration and protection programs are better coordinated among federal, state, local, and Mexican entities,” said Rep. Vargas.  “We need collaboration and resources, from both sides of the border, to tackle the ongoing crisis affecting the Tijuana River Valley and New River communities.  Strong communication between agencies is crucial to creating cost-effective projects with meaningful results.”

“Toxic pollution continues to flow from Mexico into the United States because no federal agency has taken charge to meaningfully address the issue despite decades of problems,” said Senator Feinstein. “This bill would finally end the confusion and put the EPA in charge of fixing the problem. It would require the EPA to work with federal, state and local agencies to develop and build the necessary infrastructure projects to stop the pollution and protect the health and safety of California’s border communities.”

“Solving the border pollution will no doubt need a whole of government approach to address and we will need a lead agency to coordinate those efforts,” said Rep. Davis. This bill will put the full force of federal, state and local resources toward this problem with the EPA leading the charge.”

“Toxic contamination from the Tijuana River Valley has been a serious public health and environmental hazard for San Diegans and Coronado for decades,” said Rep. Peters. “One reason is that everyone points to someone else when it comes time to make decisions. This bill would ensure the EPA is held solely accountable to clean up the longstanding crisis by requiring they work with other federal, state, and local groups and the Mexican government to address the problem and put an end to the pollution.”

“Cleaning up the New River is critical for protecting the public’s health and water quality at the Salton Sea,” said Dr. Ruiz. “I’m glad to partner with Rep. Vargas to bring more federal resources to help protect our environment, clean one of the dirtiest rivers in the country, and improve the lives of residents near the Sea.”

“The toxic pollution flowing across the U.S.-Mexico border has plagued our region for generations, and it’s long past time for real leadership within the Administration to fix this problem,” said Rep. Levin. “I was glad to help secure federal funding in the USMCA trade agreement and Border Water Infrastructure Program to address pollution in the Tijuana River Valley, but we need the EPA to step up in order to make concrete progress on the ground. I’m proud to partner once again with Rep. Vargas and the rest of the San Diego delegation to address these challenges and try to stop the pollution once and for all.”

The San Diego Delegation secured funding for the Border Water Infrastructure Program (BWIP) which was signed into law as part of the United States–Mexico–Canada Agreement (USMCA). This includes $300 million in funding that will be distributed to the BWIP over 4 years directing the EPA to prioritize wastewater infrastructure projects.

Vargas represents California’s 51st Congressional District which includes the southern portion of San Diego County, all of Imperial County, and California’s entire U.S.-Mexico border. Vargas was first elected to the U.S. House of Representatives in 2012 and is currently serving his fourth term in Congress.