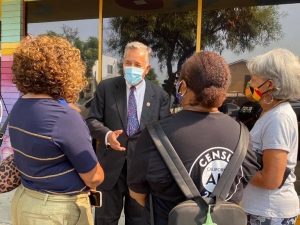 “We need to improve the efficiency and cost-effectiveness of existing conservation efforts by facilitating the coordination of Federal and non-Federal resources,” said Rep. Vargas. “The California New River Restoration program creates opportunities for measurable progress in restoring the New River in Imperial Valley.”

Once enacted, the program will provide grants and technical assistance for the planning and implementation of conservation strategies for the New River and the surrounding region.

The bill also requires the EPA to consult with stakeholders, on both sides of the border, during the creation and implementation of such programs.

Additionally, The EPA must provide grants and technical assistance for coordinating restoration and protection activities.

“The New River is one of the most polluted in the country, carrying toxins and chemicals from our southern border into the Salton Sea, jeopardizing the health of residents who live and work near the river,” said Dr. Ruiz. “I’m proud to work with Rep. Vargas to bring much-needed funding to restore the New River and improve health outcomes for my constituents and residents of Imperial and Riverside Counties.”

Background: The New River is a binational waterway historically recognized for its high concentration of pollution. The New River starts in Mexicali, Mexico, flows north into the United States through Calexico, passes through the Imperial Valley, and drains into the Salton Sea.

Last Congress, language from The California New River Restoration Act, was included as an amendment to the Invest in America Act.

Vargas represents California’s 51st Congressional District which includes the southern portion of San Diego County, all of Imperial County, and California’s entire U.S.-Mexico border. Vargas was first elected to the U.S. House of Representatives in 2012 and is currently serving his fifth term in Congress.