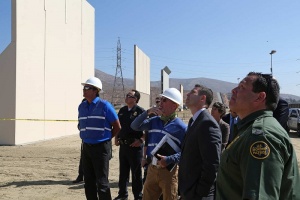 Washington, D.C. (January 23, 2019) — Today, Rep. Juan Vargas (CA-51) voted for a new bipartisan package to re-open the government and provide $1.6 billion for key border security initiatives, including $276 million for the Calexico Port of Entry.  The bipartisan package is based on legislation previously negotiated between House and Senate Republicans and Democrats prior to the shutdown.

“This wasteful and reckless shutdown has gone on long enough,” said Rep. Vargas. “Today, I was proud to vote on a package that will not only re-open the government and pay federal employees, but also offers funding for effective border security solutions.”

“Today’s vote to include the final funding necessary to complete the Calexico LPOE project is a major step toward improving our border communities and strengthening our national security,” said Rep. Vargas. “When we invest in our infrastructure, we are making long-term investments that will increase jobs, enhance safety, bolster commercial growth, and stimulate our region and our nation’s economic potential.”

H.R. 648, the Consolidated Appropriations Act, is a bipartisan bill package to immediately re-open the government and pay federal employees. It would fund all agencies with the exception of Homeland Security through September 30. It also includes language ensuring federal employees who are working without pay, or who have been furloughed, receive back pay.

Vargas represents California’s 51st Congressional District which includes the southern portion of San Diego County, all of Imperial County and California’s entire U.S.-Mexico border.  Vargas was first elected to the U.S. House of Representatives in 2012 and is currently serving his fourth term in Congress.  He serves on the House Financial Services Committee and House Foreign Affairs Committee.