“Many immigrants are committed to making the ultimate sacrifice by joining the armed forces,” said Rep. Vargas. “These bills are a necessary step in ensuring that these individuals are well informed on their path to naturalization and that deported veterans have access to healthcare services they need.”

Sadly, many non-citizen service members and veterans are deported every year due to a lack of information and tracking of these individuals. This effectively denies these deported service members the medical care they earned and in many cases require. H.R. 6092 would allow deported veterans the opportunity to temporarily parole back into the United States to seek care from a VA facility. 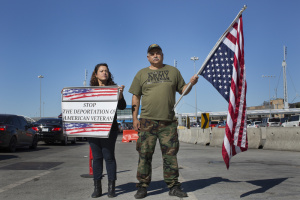 “Regardless of immigration status, all U.S. military veterans deserve access to treatment from VA medical facilities,” stated Rep. Vargas. “It’s time that we do something to ensure that all of our veterans, including those that have been deported, are well taken care of.”

Many foreign-born soldiers enlist in the military under the belief that military service will automatically make them U.S. citizens. Unfortunately, the federal government does not adequately inform them of the necessary steps for naturalization. H.R. 6093 aims to provide naturalization services at training sites.

Currently, neither the Department of Defense, nor the Department of Homeland Security, track the progress of service members and veterans’ immigration status. H.R. 6091 will establish an immigrant veteran’s eligibility tracking system.

Rep. Vargas represents California’s 51st Congressional District which includes the southern portion of San Diego County, all of Imperial County and California’s entire US/Mexico border. Vargas was first elected to the U.S. House of Representatives in 2012 and is currently serving his second term in Congress. He represented the 40th California State Senate District from 2010-2012, the 79th California State Assembly District from 2000-2006 and served on the San Diego City Council from 1993-2000.