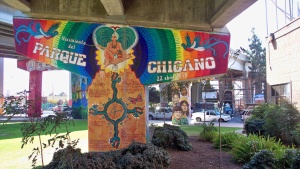 Washington, D.C.—Today, the Chicano Park Preservation Act (H.R. 3711), sponsored by Congressman Juan Vargas (CA-51), passed in the U.S. House of Representatives. This is a major step forward for Chicano Park, which is one step closer to becoming a historic landmark.

“Chicano Park is a landmark in the San Diego community of Barrio Logan and it should be preserved for future generations to enjoy,” said Rep. Vargas. “The passage of my bill in the House is very exciting because this means that we are closer to ensuring that the beautiful murals, the rich history, and the cultural heritage that makes up Chicano Park will be safeguarded for years to come.”

The Chicano Park Preservation Act instructs the Secretary of the Interior to conduct a thorough study of Chicano Park in order to evaluate its national significance and determine the feasibility of the park becoming a National Historic Landmark.

Chicano Park, located in Barrio Logan, is home to the largest collection of outdoor murals in the country, in addition to the various sculptures, earthworks and an architectural piece dedicated to the cultural heritage of the community.

Vargas represents California’s 51st Congressional District which includes the southern portion of San Diego County, all of Imperial County and California’s entire US/Mexico border.  Vargas was first elected to the U.S. House of Representatives in 2012 and is currently serving his second term in Congress.  He serves on the House Financial Services Committee and the Committee on House Administration.