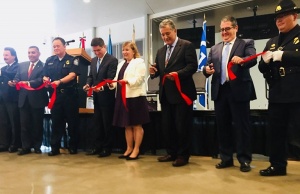 San Ysidro, CA. – Yesterday, Rep. Juan Vargas (CA-51) attended the ribbon cutting ceremony of PedEast at the San Ysidro Land Port of Entry. The new structure is the latest development of the Port’s modernization project scheduled to be fully completed in 2019.

PedEast will add 22 pedestrian lanes to the existing 14 lanes at PedWest, increasing U.S. Customs and Border Protection’s capacity of pedestrian inspection and cutting down individual wait times for the 20,000 that cross daily.

“The opening of PedEast brings us one step closer to fully realizing the economic potential of reduced wait times at the busiest land port of entry in the Western Hemisphere,” said Rep. Juan Vargas. “I look forward to the benefits of improving our border, including strengthening our national security, reducing the Port’s carbon footprint, and facilitating economic growth for California and the entire nation.”

The San Ysidro Port of Entry has been a priority of Rep. Vargas since his time serving on the San Diego City Council and the State Legislature. While in Congress, he has led a bi-partisan effort in obtaining funding for the final phases of the project. To date, he and the San Diego Delegation have secured $741 million for modernizing the infrastructure.

“Together, Reps. Davis, Hunter, Issa, Peters and I – as the San Diego Delegation – worked together and made a case for funding this project. We collectively convinced our colleagues on both sides of the aisle of the benefits of this project,” said Rep. Vargas. “When we invest in our infrastructure, we are making long-term investments in our community.”