Fighting for the underdog, helping the little guy and going above and beyond was the only way Carlos E. Figari knew how to do his job as the Director of the Small Business Development Center in Imperial Valley and later as the Director of the Veterans Business Outreach Center in Carlsbad, CA. Carlos worked in the real estate industry for many years, including with his father-in-law at Cowin Realty, and then in Scottsdale and Yuma, Arizona, where he founded his own appraisal, realtor and mortgage offices. Carlos later graduated from the University of Phoenix in 1995, and earned his Master of Business Administration in 2009, always striving to continue learning and teaching about business. As a successful, long term business owner, he had the life experiences needed to really help struggling business owners and aspiring newcomers.

Recently, one of his clients attested that without Carlos, he would have lost everything including his own home. At 27 days till the home was to be auctioned, Carlos took the client under his wing and found a way to salvage the home. With this boost in confidence, the client was able to regain his business and is now on his way to success.

Many related to Carlos in different ways. Some felt that he was a friend, a coach, a brother, a father figure, but many knew him as a mentor. Carlos had a smile and a way of greeting people that made everyone feel worth a million bucks. He was easy going yet hard working, big in stature yet gentle at heart, aggressive by nature yet nurturing. Carlos was his own yin and yang and his ability to be balanced gave him more power to serve others.

Carlos had a servant’s heart and was always ready to jump in and help others. He was a long time Rotarian in the San Luis F.R.O.N.T.E.R.A Rotary Club and later became an adjunct professor of Business at Arizona Western College. 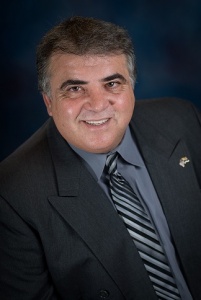 Carlos Figari was also a mentor and guide when the Beyond Borders Gazette idea was created. “After writing our 55 pages business plan, he was excited about our project and told us: “I think you have no idea about the impact your publication can have, it can easily grow across the Mexico-US border region. Keep going! It will be a success!” Said, Ellie Burgueño, BBG director.

Carlos Esteban Figari, age 62, left us on January 2, 2018, following a courageous battle with prostate cancer. He was born in Junin, Argentina on September 19, 1955, the same day that the Peron government was deposed. He was born to parents Carlos Julio and Lady Nelly Figari. Carlos married Kathryn Cowin on November 28, 1976 in Redlands, California, and they remained married for forty-one years, until his death. He leaves behind his wife, Katie, of Ontario, California, his children, Barbara of Yuma, Arizona, Michael of Santa Monica, California, as well as son-in-law Corey, and grandchild Rhys.

Rest in peace, a great man!