Regional Leaders Celebrate the Reopening of the Border 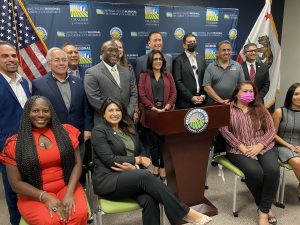 The reopening of the border to visa travelers comes as oxygen to the Imperial Valley as a regional leader shows their excitement to welcome back Mexicali residents into their local economy after 19 long months.

The Imperial Valley Regional Chamber of Commerce hosted a joint regional press conference in partnership with several local government entities regarding the effects of border delays and the scheduled reopening of the East Land Port of Entry scheduled for Nov. 8.

“Oxygen. That’s what we are getting now that our borders will be open again,” said County Supervisor Jesus Escobar. “This is not only an issue that affected Calexico and its economy but it affected the entire Imperial Valley and its workforce,” Escobar said that Imperial Valley is very dependent on the Mexican economy and the timing is right since Black Friday and Christmas shopping is around the corner.

Calexico Mayor Javier Moreno said the city has open lines of communication with all the cities in the Imperial Valley to support one another and help each other.

Calexico Councilman Raul Urena said he was proud of the regional effort by other border communities asking the Biden Administration to reopen the border.

“No more sleepy County of Imperial. No more sleepy Calexico. By doing joint efforts, we can be strong and achieve great things,” Urena said. “This has shown us that the Mexican people and its culture are an important factor to our economy.”

Imperial Valley College Interim President/Superintendent, Dr. Leonard Johnson, said IVC enrollment has gone down since 2019 and the border closure has been a factor.

“We are also working with CETYS University in an agreement so that our local talent can stay here and not lose it to Los Angeles and San Diego. A closed border doesn’t help us,” Johnson said.

The most impacted city due to the COVID restrictions was Calexico that is now helping merchants welcome Mexicali residents in a big way.

The City of Calexico seeks to efficiently manage limited resources and adequately respond to service demands and a declining local economy. To do so, a variety of tools are needed, the City of Calexico acknowledges the immense impact that the Covid-19 shut down has had on our local economy and small businesses and wishes to help stimulate the economic recovery by adopting immediate short-term changes to certain regulations.

The City of Calexico recognizes that it is in the best interests of the City and its local businesses to allow for the creation and issuance of special permits during the holiday seasons and with the unique COVID-19 situation, that incentivizes, stimulate, and promote commerce and benefit the City and its residents. The permit will cost businesses $50.00 for the year from the Planning and Building Services Department and the business will also need to have an active City Business License to operate on the sidewalk.