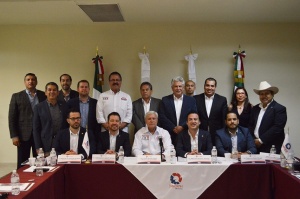 In order to present priority issues for the State industry, the Regional Industrial Block of the National Chamber of the Transformation Industry (CANACINTRA) composed of the delegations of Tijuana, Tecate, Ensenada and Mexicali met with Bonilla Valdez, candidate of the Alliance “Together We Will Make History in Baja California” to Governor of Baja California in the facilities of the industrial organization in Mexicali.

At the start of the meeting, Lagarde Amaya, pointed out that the Regional Industrial Block of CANACINTRA of Baja California represents more than 2 thousand Transformation industries and 150 thousand Workers in the State, for that reason the establishment of agreements and commitments from the different candidates with the industrial sector it is fundamental for the development of coordinated strategies that promote the economic development of Baja California.

On behalf of Mexicali, the candidate was asked to put special interest and to intervene in a coordinated manner with the federal government to deal with the issue of Electric Power, Interconnection and Natural Gas, fundamental inputs to preserve the competitiveness of Baja California.

In parallel, Tijuana insisted on the need to give priority to the Law for the Promotion of State Supply, to establish it as a strategic instrument to reduce imports of supplies, recalling that Baja California currently acquires 97% of its inputs abroad, which represents the import of 200 billion dollars

On Tecate’s part, a review of the Labor Situation (trade unionism) was requested and issues of delay at the export crossings were reviewed, and on the part of the delegation of Ensenada, the priority was established to form a Committee Pro construction of the Specialties Hospital of the Mexican Social Security Institute (IMSS).

Bonilla Valdez, candidate of Morena to Government of Baja California, assured the businessmen his willingness to work in coordination and hand in hand, in case of being favored with the vote of Baja Californians, as well as to thoroughly review the issues identified as a priority for the industrial sector.

At the end of the meeting the candidate of the Alliance “Together We Will Make History in Baja California”, signed a Letter of Commitment to the Industrial Sector, which must represent according to the industrialists present, the beginning of a process of improvement and modernization of the next Government of the State to shore up the government’s relationship with employers, enhancing their right to be heard, informed, respected, treated without discrimination and in an equitable and fair manner.

Lagarde Amaya, President of CANACINTRA Mexicali, thanked Candidate Bonilla Valdez for his presence and assured that the Chamber is open to listening to the different candidates to learn about their platform, strategy, and commitments to the Baja California community, for which he assured that they will hold more meetings with all candidates running to the different public positions.