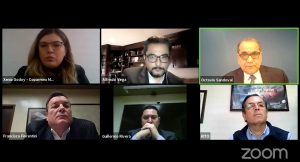 Mexicali, B. C.- A virtual press conference was held by COPARMEX Mexicali, to communicate and clarify the rejection by the IEEBC (Baja California State Electoral Institute) to the referendum of the so-called “Gandalla Law”.

Guillermo Rivera, Legal Counsel of COPARMEX Mexicali, explained there are three stages of the said referendum; the first stage in compliance with the requirements of the citizen participation law, which was covered by collecting more than 62 thousand signatures; the second stage is the declaration of significance, which was also approved; the third stage is the declaration of provenance, which the institute determined as inadmissible.

According to the modifications presented by the State Congress of the same articles 16, 78, and 80 of the Political Constitution of the State, the gender issue was integrated, leaving in the same sense the main question of the referendum that public officials seek to be reelected without abandoning their position.

“The legislators cosmetically modified the articles to seek that the Electoral Institute generated this determination. We consider that there are many legal elements for this decision of the Institute to be challenged and we will surely be able to achieve it before the State Electoral Tribunal or, failing that, before the Regional Chamber of the Electoral Tribunal because the matter of the so-called Gandalla Law did not change,” Rivera clarified.

For his part, Francisco Florentini, former president of COPARMEX Mexicali, said: “We have never argued against re-election, (…) what we are against is that a legislator vote for him on a law so that he can be his direct beneficiary.”

Thus, the president of COPARMEX Mexicali, Octavio Sandoval, announced that they will continue working on the resolution of the Federal Electoral Court in the Regional Chamber so that compliance is achieved and the decisions of the citizens are respected.