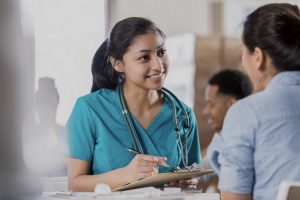 Turbulent times may be ahead for Hispanic workers, a new report from Wells Fargo found.

The firm expects Latino workers to take an outsized hit if a mild recession happens in 2023 as it is projecting.

The Hispanic jobless rate has historically exceeded the non-Hispanic unemployment rate over the past few decades, however, the gap between the Hispanic unemployment rate and the non-Hispanic jobless rate has narrowed during economic expansions, and it nearly closed in periods characterized by a strong labor market. The narrowing gap in joblessness between Hispanics and non-Hispanics, and similar trends among other racial and ethnic, and educational groups, have been so pronounced during strong labor markets that it has informed the Fed’s policy goals around maximum employment.

Why has the Hispanic jobless rate risen more than the unemployment rate among non-Hispanic individuals in economic downturns? To be officially counted as “unemployed,” a displaced worker must stay in the labor force by actively searching for a job. Therefore, if some groups of displaced workers are less likely to depart the labor force in downturns, they could see a larger rise in unemployment for a given rate of job losses. However, over the past four downturns, Hispanics on average saw a bigger drop in labor force participation than non-Hispanics, indicating that greater attachment to the labor force does not explain the relatively steeper rises in unemployment among Hispanic workers during recessions.

A recession in the United States next year, if realized, would bode poorly for all Americans’ job and income prospects, but is likely to be harder on Hispanic and Latinx workers. Historically, unemployment among Hispanics has risen more than non-Hispanics during downturns while wage growth has slowed more sharply. The more severe impact of recent recessions on the Hispanic workforce reflects the greater tendency to work in more cyclically-sensitive industries, such as construction, manufacturing, and transportation. But employment growth in those industries has been strong over the past two years as demand for goods and housing has boomed.

Consequently, the gap in the unemployment rate of Hispanics relative to non-Hispanics has narrowed to historic lows. However, interest rates have shot up significantly this year, and we look for further rises in the months ahead. These rate increases will put a damper on residential and non-residential construction as well as goods-producing industries, which likely will lead to some retrenchment in terms of Hispanic labor market outcomes.

While any recession is likely to be a setback for Hispanic workers’ progress in the labor market, Wells Fargo does not expect the next downturn to be nearly as damaging to the U.S. jobs market as the past two recessions. Employers have spent the better part of the past five years struggling to find workers. Hiring challenges have come not only because of the strong economy in the late 2010s and quick bounce back from the COVID recession but because of significantly slower growth in the U.S. working-age population. Wells Fargo anticipates employers will hold on more tightly to workers than during past recessions, having a better appreciation of how difficult it may be to hire them back.

As employers look to expand their workforce as the economy recovers, they will increasingly need to turn to Hispanic and Latinx workers. Hispanics have accounted for a stunning 86% growth in the labor force over the past 10 years, and, with the group expected to account for half the country’s population growth over the current decade, Hispanics will remain a critical source of labor in the years ahead.