By: Mario Beltrán Mainero, Consul for Community and Political Affairs at the Consulate of Mexico in Calexico

2022 has been a turbulent year on the international stage. Russia’s aggression towards Ukraine shocked the entire world, as large territorial invasions of countries were thought to be a thing of the past. In addition, we continue to battle COVID-19, oil prices are skyrocketing, inflation is rampant, and climate change is no longer a threat but a terrifying reality.

Yet, there is good news for the end of the year: we will have a soccer World Cup. In December and November, the most important international tournament on Earth will be played in Qatar, during which teams from all corners of the globe will seek to take the trophy from France, the champions in Russia 2018. The World Cup is played every four years in the months of June and July, but this year it is being pushed to the winter (in the northern hemisphere) to avoid the high summer temperatures in the Arabian Peninsula.

I will not talk about sports issues, but instead, I will focus on some geopolitical issues surrounding this first World Cup to be held in the Middle East.

To begin with, since FIFA (International Association Football Federation) determined that the 2018 and 2022 World Cups would be played in Russia and Qatar, there were multiple allegations of corruption within the organization, to a suspicion that the governments of those countries bribed officials in order to be the chosen hosts. This triggered investigations by different authorities around the world, including the FBI, followed by criminal proceedings and punishments for some individuals.

To make matters worse, Qatar has been accused of violating the human rights of migrant workers. According to the British newspaper The Guardian, more than 6,500 workers from India, Pakistan, Nepal, Bangladesh, and Sri Lanka have died in the last eleven years in Qatar, many of them during work related to the organization of the tournament. Various NGOs have called for a boycott of the contest for this reason, without much success.

Regarding the Russian invasion of Ukraine, FIFA determined the suspension of the Russian team from all international competitions, including the World Cup. Russia had not yet qualified for the tournament, but was left out of the European playoffs—it was going to play a knockout match against Poland—due to this aggression. Ukraine, meanwhile, will not be in the tournament as it lost a tough playoff game against Wales—which will be attending the World Cup for the first time in more than six decades.

On April 1st a draw divided the qualified teams into eight groups of four teams each. The draw resulted in certain face-offs that, off the field, have geopolitical implications. 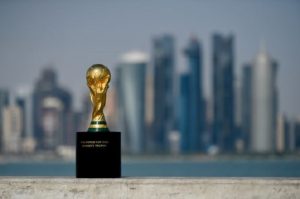 The United States will play against Iran in Group B. It is not news to anyone that there is a great rivalry between these two countries, particularly since the Islamic Revolution of 1979 in which the ayatollahs took power and the parallel episode during which 52 diplomats and US citizens were held hostage in the US Embassy in Iran for more than a year. Today the United States and Iran are negotiating, to no avail so far, a treaty that limits the nuclear capacity of the Islamic country. In addition to these two political enemies, Group B will consist of England (where soccer is supposed to have been invented and which once colonized US territory) and Wales, which has a long history of belonging/independence with England. It will be a geopolitically fascinating group.

In Group C we have Mexico and Argentina, two Latin American countries with a great fútbol rivalry (mostly favorable to Argentina) but that today have a solid political understanding under their leftist governments.

Group D could face two democratic Western countries, France and Australia, which a few months ago had a serious disagreement due to the fact that Australia canceled contracts for the purchase of French submarines because the Australians preferred to acquire nuclear submarines from the United States (in a joint effort to contain China in the Pacific Ocean).

From a historical perspective, Group E is interesting because it includes Germany and Japan, former partners in World War II, as well as Spain, which during that war had clear preferences in favor of this bloc (called “the Axis”) over ” the Allies” (United States, France, and the United Kingdom). It is important to point out that today all these countries have clearly positive relations in a framework of democracy and free trade.

Although the aforementioned geopolitical details are intriguing from the perspective of international relations, we hope that during the World Cup the sporting spirit reigns, as has always been the case, and that, on the field, we can appreciate intense and honorable matches. What we want to see in Qatar, regardless of everything that is happening around the world, is an atmosphere of enjoyment and celebration around a ball.