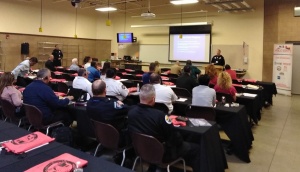 A group of Imperial County Firefighters rushed to contain a fire that started in a house kitchen having just a few minutes to prevent a bigger fire that would consume the property.

This scenario is what firefighters go through as part of their preparation when they are in the academy and this was a drill that took place at Imperial Valley College during the Public Safety Summit where law enforcement agencies from Mexicali, Imperial Valley and Yuma County met to discuss border safety and look for ways to collaborate with each other.

This is a continuation of a series of meetings that began with the Border Mayor’s Summit last year. This time was the city of El Centro’s turn to host the public safety summit and talk about a comprehensive regional collaboration of public safety, crisis management, and disaster plans.

The meeting was held at the Imperial Valley College Public Safety Department where they have their Fire and Police Academy. Attendees had the opportunity to see shooting and fire practice demonstrations by the local police and fire departments. The main focus of the public safety summit was to identify opportunities and address challenges in the region.

El Centro Councilman Efrain Silva has been involved with the Mayor’s Summit since the very beginning and said that the public safety event exceeded his expectations and mentioned that the agencies are talking about making agreements in order to have law enforcement agencies of Mexicali come and train at Imperial Valley College.

“The goal of this summit was to improve the communication between our sister cities when it comes to public safety,” Silva said and added that this first meeting will lead to a formal agreement that will be signed later on to formalized everything that was discussed on the summit.

El Centro Mayor Cheryl Viegas-Walker said having these meetings are critical since natural disaster have no boundaries and they have to come together to have those plans in advanced.

“This is also an opportunity for us to show what we have available here at Imperial Valley College and all the training resources they have,” Mayor Viegas-Walker said.