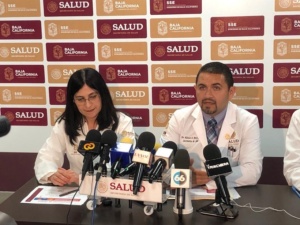 After several weeks in which the population has been alerted to the new pandemic that is wreaking havoc mainly in China, Italy, South Korea, and Singapore, plus some isolated cases detected in the United States, the Secretary of Public Health in the State of Baja California, presented the action plan and prevention measures, after channeling the first possible suspected case of CoronaVirus (COVID-19).

This is a 28-year-old resident of El Centro, California, who, weeks ago, was in Italy, during a trip through different cities in Europe, so when presenting symptoms, she was taken to a compliant review through a state health system prevention protocol, thus becoming the first case likely to have acquired the virus.

This was stated by the Secretary of Public Health of BC, Dr. Alonso Pérez Rico, clarifying that the patient is under observation, while the corresponding laboratory tests are being carried out, to subsequently confirm, or rule out, the presence of the virus. Likewise, he remarked that she has presented an improvement in her health status, and is being attended by the staff of a private clinic together with a specialist of the state health system.

On the other hand, he emphasized the situation of the more than 82 thousand cases that have been confirmed in different countries, the mortality rate barely represents 3% of the cases, although there is still no vaccine or treatment. In addition, they considered that since January 16, there are already hospitals contemplated where people are exclusively treated in absolute isolation before a possible case of Coronavirus (COVID-19) is confirmed.

It should be noted that the coronavirus has symptoms similar to those of the common flu or flu, so the population is urged to, under any signal or suspicion, go to their clinic or health unit to be inspected by a doctor, instead of self-medicating. Also, enforce daily hygiene, such as washing hands with soap and disinfectant frequently, and cleaning the surfaces with which you have contact at work, school and at home.