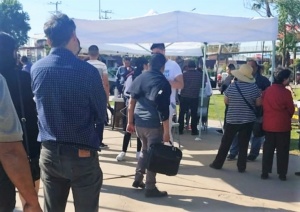 In the midst of the COVID-19 health contingency, public consultation or plebiscite about the permanence of the Constellation Brands brewery, took place this weekend amid the controversy between residents of the Mexicali Valley and supporters that live in the city in relation to the impacts it would bring to the region.

In the commercial sector, the Business Coordinating Council (CCE), opposed the plebiscite, arguing the company had already complied with the permits and environmental impact studies established by law, so there should be no need to ask if this project should stay or go.

Senator for Baja California, Gina Cruz, asked to postpone the citizen consultation after COVID-19 cases were confirmed. She said it would represent a public health risk for all citizens who decide to participate. However, this consultation had the support of the Federal Government.

The President of Coparmex Mexicali, Ernesto Elorduy in conjunction with Coparmex Baja California, issued an appeal before a federal district judge urging Mexican President Andrés Manuel López Obrador, to carry out actions to establish safe conditions for voting citizens. Something that was not done properly, according to them.

On the other hand, civil and peasant organizations, such as “Mexicali Resiste”, were calling on citizens through social media to cast their vote to defend the use of water resources in the region, since they argued water supply could be put under risk if the company continues operations.

Thus, the preliminary results on Sunday night indicated that 70% of voters spoke out against the installation, while 27% spoke in favor. It is estimated that only 12,000 residents went to the polls in Mexicali, San Felipe, and the Mexicali Valley.