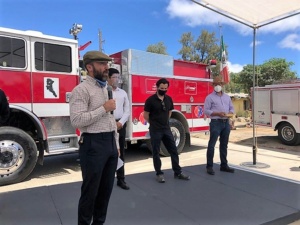 Ensenada, Baja California. – “United for Valle de Guadalupe” is a fundraising campaign led by the Provino Baja California Committee that arises as a result of the fires in October 2019 in which, according to CONAFOR figures, 6,300 hectares were affected causing loss of housing, farm animals, pets and human lives, which showed the courage and dedication of the Volunteer Firefighters as well as the lack of infrastructure at the El Provenir station to face this type of contingency.

Responding to the same call of support, citizens, the local, national, southern California gastronomic sector, organizations and festivals in Mexico, as well as wine producers, held fundraising events in Ensenada, Valle de Guadalupe, Monterrey, Guadalajara, Mexico City, and San Diego, California, managing to collect the sum of $1,089, 339.92 pesos, which has been earmarked for:

– Linking with the UABC Faculty of Architecture and developing a preliminary project for the construction of a decent and functional station.

– Partnership with the “Bi-National Fire Program” from the San Diego Fire Department, in California, with support in structural personal protective equipment and training of Volunteer Firefighters. In turn, collaboration in the planning of construction of the new station.

– Training for the correct use and maintenance of the extinguishing machine (firefighter) given by Javier Meléndrez.

– Purchase of uniforms: T-shirts and sweatshirts with institutional embroidery.

– Bodywork, automotive paint, and lettering of all units.

– Purchase of personal forest protection equipment (in the process).

– Payroll is equivalent to one week for 12 firefighters who fought the largest fire in 2019.

– Fuel support: Gasoline and diesel for all units.

– Support with pantries throughout the health contingency.

– Detection of vulnerable points and a high risk of fire.

– Prototyping to identify these points.

– Development of a fire prevention campaign in the area.

This summer and when the Santa Ana wind conditions appear, they are particularly alarming due to the abundant rainfall during the winter that generated a high growth of wild vegetation that is highly flammable. In this sense, the Committee came in coordination with the Ensenada XXIII City Council and “For a Valley of Truth”, they will be starting a digital campaign that promotes the prevention of forest fires through three lines of communication:

6) Alerts: Warn the population about the high risk of fire when Santa Ana winds appear.

Endorsing the commitment that the Provino Baja California Committee has with the community of wine valleys and the effort to achieve sustainable and comprehensive development within the area, the rest of the population is invited to become aware of these actions, join and from then contribute to the reduction of this type of claims.