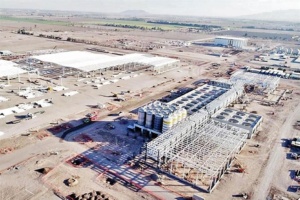 Given the reality that we are currently experiencing, our Country needs three fundamental principles to strengthen its economic development: easiness to invest and do business; a stable political and social environment and finally unrestricted adherence to the rule of law, assured Alberto Sánchez Torres, President of the National Chamber of the Transformation Industry (CANACINTRA), Mexicali Delegation.

However, he specified, we see with concern that, from the Presidency of the Republic, investment projects that represent growth, economic stability and momentum for many regions of Mexico continue to be attacked without legal bases; It seems that the daily rhetoric focuses on systematically discrediting the private sector for purely political reasons.

It is deeply regrettable, he said, the recent announcement by the President of the Republic, Andrés Manuel López Obrador, who, once again, publicly discredited the installation of the Constellation Brands company in Mexicali.

“We are convinced that the chief executive is being misinformed with respect to the technical feasibility and availability of water in our entity and is solely taking as a basis an unrepresentative public consultation and clearly illegal and unconstitutional,” said Sánchez Torres.

Baja California, stated the President of CANACINTRA, lost the largest investment in its modern history and with it the economic spillover through the parallel construction of new business projects and first-rate services that would benefit the community in an integral way.

The reality is that the supply of water has never been the problem, Constellation Brands investment was at the mercy of interests and political groups that rarefied and polarized the environment, managing to convince the community that such investment would generate water scarcity when it represents only 0.2% of the total volume of water in the region.

“The consequences translate into direct damage to the most vulnerable population since it is thanks to the payment of taxes from formal companies that the government can access resources that are transformed into more doctors, nurses, medicines, public works, lighting, paved streets and especially in a multiplier of progress for the neediest that we need so much at the moment,” said Sánchez Torres.

Today, the numbers don’t lie and they are truly alarming on different fronts; there are half a million confirmed infections and 52 thousand Mexicans have died in this pandemic, we have lost a million jobs and violence in our country is escalating.

At the same time, the economic and social sectors are in their worst crisis and the President of the Republic, instead of concentrating all his effort on countering these true enemies, directs his effort to discredit new investments.

As a society, he explained, we have to be clear today more than ever that comprehensive social benefit cannot be achieved without companies that contribute with their taxes to development; unfortunately, Mexicali does not lose a brewery, but rather a platform for progress and well-being for all.