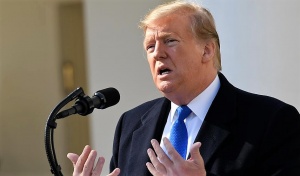 WASHINGTON, D.C.- Yesterday, the White House confirmed that President Trump will sign the government funding bill and declare a national emergency to go around Congress and build his border wall. The president’s move to ignore overwhelming public opposition to the border wall not only undermines congressional authority, but also continues to ramp up Trump’s own manufactured crisis.

Congress must hold Trump accountable by voting on a resolution to disapprove of the national emergency declaration and filing a lawsuit. Congressional leaders need to act immediately to stand up to Trump’s illegal power grab.

A national emergency declaration to build the border wall is illegal:

The President has no authority to use the military to construct his wall without going through Congress and the military isprohibited from enforcing domestic law without express congressional authorization. According to statue, the president cannot use the military to enforce domestic law – including the enforcement of immigration law. This separation is a necessary safeguard for our democracy. This extreme use of executive power sets a dangerous precedent which undermines our Constitution.

The Constitution expressly grants Congress the power of the purse. According to the Anti-Deficiency Act, the federal government cannot spend money in advance of the congressional appropriation. By attempting to divert military funding for the border wall without Congressional approval, the President is not only jeopardizing the well-being of military families, but is also likely violating the ADA and the separation of powers.

According to legal scholar Ilya Somin, even if the President declares a national emergency, he may not automatically have the authority to build the border wall with military funding. The authorization for the use of military funding for civil projects, like the wall, still rests with Congress.

This declaration is an attempt to undermine the rights of private landowners:

The federal government only owns one-third of the land to build the wall, while the remaining two-thirds is private, state and tribal land. This national emergency declaration is an attempt to expand the use of eminent domain to seize the land for the border wall from private owners. However, the Supreme Court has said the use of eminent domain has to be “expressly authorized” and the use of emergency powers do not explicitly grant the federal government this authority. In attempting to make one of the largest federal land grabs in U.S. history, President Trump is undermining the rights of private citizens and likely continuing CBP’s notorious history of undercompensating owners.
President Trump manufactured a crisis at the border, but it has nothing to do with his wall:

There are still children separated from their families and the administration has continuingly dragged its feet to reunite families.  The laundry list of abuse continues to grow: the administration is still incarcerating asylum seekers; regularly denying or short circuiting due-process; wastefully sending thousands of troops to the border; and turning away vulnerable children, women and men away. The cruelty, civil rights and coercion issues are far from solved.

Bottom line: There is no evidence of a national security emergency that warrants the use of the military. Overall border crossings have decreased since 2016 however there are a large number of families and unaccompanied children seeking asylum at the southern border at ports of entry. Rather than responding to this increase of families at the southern border in an orderly manner by increasing capacity to process asylum claims, the Trump administration instead chose to implement punitive policies that negatively exacerbated the situation.

The administration should work with Congress to invest in common-sense solutions like addressing root causes of migration and upgrading ports of entry.

The Immigration Hub is a national organization dedicated to providing strategic support to a broad spectrum of organizations seeking to enact progressive immigration policies at the federal and state level.