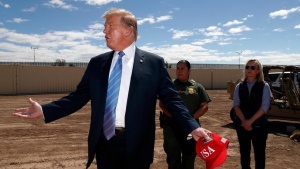 It took 33 years for another sitting President to visit the Imperial Valley. Ronald Reagan was the first one to visit the Valley. It was on January 3, 1986, when he arrived at the Naval Air Facility as he was greeted by local residents. Reagan also took the opportunity to give his condolences to the wife of Enrique Camarena who was murdered months before his visit. He then flew to Mexicali to meet with the then Mexican President Miguel de la Madrid.

Since then, the Imperial Valley has not received a President of the United States until today.

“We’re building a lot of wall. We’re going to look at a piece of it today. And I was just told it had a tremendous impact already the piece that we’re going to be looking at,” Trump said during a roundtable discussion with Border Patrol Agents.

About illegal immigrants coming to the country, Trump said:

Upon his arrival to the Imperial County, there were demonstrators that showed their support for the President and those that protested his arrival. Some protestors fundraised about $2,700 dlls to bring baby Donald Trump balloon and flew it near the wall to protest against president Trump’s policies and the threat of closing the southern border.

While the President was being transported to Calexico and out of it, regular traffic was interrupted.  All main streets and freeways from the City of El Centro to Calexico were blocked.

A group of Trump supporters waited for him outside NAF to get a glimpse of the President.

” I’m excited and I appreciate him coming to see him come here and addressed the issues we have here at the border,” said Shelley Franks from Brawley.

Kathy Ball from El Centro voted for Trump because of his business background and understanding of how the economy works.