President of Mexico, Andres Manuel Lopez Obrador, had his First State of the Union Address 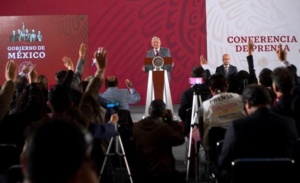 The President of Mexico, Andrés Manuel López Obrador had his first state of the union address, after 9 months of the administration, as leader of the federal executive power he offered a speech before members of Congress, secretary of states, among other officials, in addition to special guests, including businessman Carlos Slim.

The president pointed out different aspects that have been working during his government, as part of the changes and strategies that are being carried out, and part of the so-called “Fourth Transformation of Mexico”, highlighting social assistance programs, the restructuring of salaries for officials, as well as the infrastructure projects ahead.

One of the first points he highlighted was to ask congress to carry out the necessary procedures to eliminate the jurisdiction of public officials, including the president himself, as well as to legitimize the application of popular consultations, including the possibility of revoking any public servant’s mandate to be carried out halfway through his term in government, which is, three years after the president was elected.

Lopez Obrador mentioned he approves opponents who promote protests against him and does not pretend to attack them, although he stressed that they have not been able to consolidate a fraction that has the credibility to act bluntly. He declared no one will be above the will and sovereignty of the people.

He also highlighted the efforts that have been made between the president of the Business Coordinating Council (CCE), Carlos Salazar, and the entrepreneur Carlos Slim along with the head of the CFE, Manuel Díaz Bartlett regarding the natural gas pipeline agreement, which seeks better conditions for private investment in public works projects covering energy production.

In the same way, he thanked the governors, for their support and good coordination that is being carried out in terms of safety, is a priority issue to attract investment, far from the partisan differences that may exist. Finally, he acknowledged Mexico is not growing in the pace it should, although the economy is currently stable.