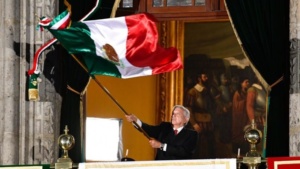 Before more than 50 thousand people who gathered at the Zocalo in Mexico City, the president of Mexico, Andrés Manuel López Obrador, performed the protocol ceremony of the 209th anniversary of the Grito de Independencia, on the night of September 15. Accompanied by his wife, Beatriz Gutiérrez Müller, at 0:00 a.m. on September 16, he rang the bell on the balcony of the National Palace.

The President of Mexico decided to realize the honorary act only accompanied by his spouse at the time of the shout, while he shared a toast with the members of his cabinet and other guests in the main courtyard of the National Palace.

Also, when singing the popular cry of “Viva Mexico!”, and after mentioning each of the so-called heroes of the country; Miguel Hidalgo, José María Morelos and Vicente Guerrero; the president, for the first time in history, mentioned women who participated in the war of independence, such as Leona Vicario and Josefa Ortiz de Domínguez.

It should be noted that on September 16, in Mexico and all embassies and consulates with diplomatic representation abroad, the beginning of the war or “cry of independence” of 1810, held in the town of Dolores, Guanajuato, is commemorated. Which would lead to a battle for the independence of the domain from the Spanish Monarchy that lasted 11 years, decreeing official independence until September 27, 1821.

President López Obrador also proclaimed quotes of the People of Mexico and Democracy followed by the cries of “¡viva!”, Which resonated in a plethora way by the thousands of attendees present in the Zocalo, to give way to the fireworks show, which illuminated the sky with the Mexican colors.