President Biden Calls for Unity During His Inaugural Speech 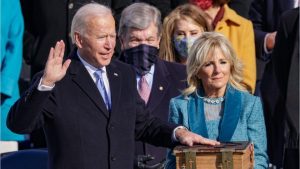 Joseph R. Biden, Jr., has been sworn in as the 46th president of the United States, taking the reins of power at a perilous time in American history and urging a bitterly divided country to unite around defeating the deadliest pandemic in a century.

His first executive order, the “100 Days Masking Challenge,” will symbolize the administration’s sharp turn from the Trump era by emphasizing recommendations by public health experts. A president cannot tell states or cities what to do, but a federal mandate will affect federal offices and federal lands and will urge states to do the same.

“But the American story depends not on any one of us, not on some of us, but on all of us, on we the people, who seek a more perfect union. This is a great nation. We are good people. And over the centuries, through storm and strife, in peace and in war, we’ve come so far, but we still have far to go,” Biden said, “We’ll press forward with speed and urgency, for we have much to do in this winter of peril and significant possibilities. Much to repair, much to restore, much to heal, much to build, and much to gain. Few people in our nation’s history have been more challenged or found a time more challenging or difficult than the time we’re in now.”

President Biden said he will be a leader for all Americans whether they support him or not.

“If you still disagree, so be it. That’s democracy. That’s America. The right to dissent peaceably. Within the guardrails of our republic, it’s perhaps this nation’s greatest strength. Yet hear me clearly, disagreement must not lead to disunion. And I pledge this to you, I will be a president for all Americans, all Americans,” Biden said in his speech.

“I understand that many of my fellow Americans view the future with fear and trepidation. I understand the worry about their jobs. I understand like my dad, they lay in bed wondering, can I keep my health care, can I pay my mortgage. Thinking about their families, about what comes next. I promise you, I get it. But the answer is not to turn inward, to retreat into competing factions, distrusting those who don’t look like — look like you or worship the way you do or don’t get their news from the same source as you do. We must end this uncivil war that pits red against blue, rural versus — rural versus urban, conservative versus liberal. We can do this if we open our souls instead of hardening our hearts. If we show a little tolerance and humility, and if we are willing to stand in the other person’s shoes — as my mom would say — just for a moment, stand in their shoes. Because here’s the thing about life: there’s no accounting for what fate will deal you.”

One of the biggest challenges will be to overcome the pandemic and restore American leadership around the world. Biden said America will lead again by facing challenges.

“America has been tested, and we’ve come out stronger for it. We will repair our alliances and engage with the world once again. Not to meet yesterday’s challenges, but today’s and tomorrow’s challenges,” Biden said. “And we’ll lead not merely by the example of our power, but by the power of our example. We’ll be a strong and trusted partner for peace, progress, and security.”