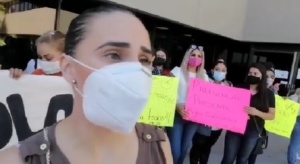 Mexicali, B.C.- Preschool teachers manifest in the state capital of Baja California, to demand transparency from the State Secretary of Education in the process of appointing positions, and demand is granted to the 178 teachers from group A who passed the exam last cycle to occupy the available positions.

Teacher Alejandra Figueroa explained that the Secretary of Education, Catalino Zavala, said that there were no places without any official documentation to confirm it, however, when reviewing the SIGED page, 219 open places appear at the state level. In such a way, the claim could be fully covered, she said.

She explained they have not received the pertinent follow-up, even when they were told that they would receive it, they were not allowed at the director of Professional Teaching Services office, Julio César Ledezma. Besides, they have also gone to the governor, but he does not show documentation that confirms it.

“There is no objective answer, neither confirmed nor official, just all of the word, which already bothers us because yesterday it was the last day to be assigned and today the new list for 2020-2021 begins,” added Figueroa.

Furthermore, she shared that they traveled to Mexico City to deliver a letter addressed to the President of the Republic, Andrés Manuel López Obrador and they went to the Secretary of Public Education to leave another letter to Esteban Moctezuma, respectively.  After that, they went to the CNDH to file a complaint.

Later, in response to the presidency, they were asked to go to Tijuana and file a complaint with the Public Service.

“The request we have is clear, we want the total allocation of positions to the 178 teachers that are needed,” said Figueroa. She concluded that if this is not possible, they should receive official verification and in writing that there are no more positions to appoint.