Port of Entry in Calexico Opens its Doors Southbound 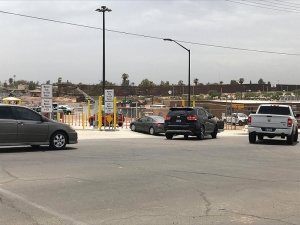 The Calexico Port of Entry Expansion by the General Services Administration is about to be completed. Traffic to the south is already being redirected through Imperial Avenue to Second Street to the new port on Cesar Chavez Boulevard starting today, July 10th.

In order to return to the United States, traffic will continue northbound through the current port of entry. That will change in November when the vehicular traffic is moved to the new port.

Calexico’s Port of Entry is the third busiest in the United States with approximately $4 million who cross each year to Calexico using vehicles. The cost of this project was $370 million dollars.