Poll Workers in Imperial Valley Will Receive a Stipend Increase 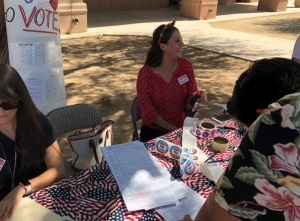 In an effort to make sure that elections and vote counting runs smoothly this year, the Imperial County Board of Supervisors recently approved a recommendation to increase the stipend of poll workers to $100.

The November General Election is just around the corner and candidates are now in the last phase of the campaign trying to earn the people’s votes.

That’s one part of the election season, the other half belongs to the local elections department that prepares for weeks to make sure votes are counted and polling places are ready on election day.

The Board of Supervisors recently approved a stipend increase of $100 to inspectors and clerks who work the polls. In addition, poll workers will be paid a $15 incentive to attend training and work election day. An incentive of $10 will be paid to inspectors who are in charge of bringing and taking back the necessary items to the polling place. The elections department needs at least 300 poll workers to cover the 55 precincts in the Imperial Valley. The previous stipend was $65 for the entire day.

This increase is done to motivate more people to work as poll workers since there has been a decrease in participation in recent elections.

The stipend increase was a recommendation by the County Elections Ad Hoc Committee that was formed thanks to the direction of Supervisor District 4 Ryan Kelley who suggested taking a new approach to make the local elections more efficient and provide more voter information to the public of how to register to vote, information about polling places, and candidates in order to encourage more participation this upcoming election day.

Applications to become poll workers can be obtained at www.co.imperial.ca.us/regvoters. For more information, you can call the Imperial County Register of Voters at (442) 265-1060.