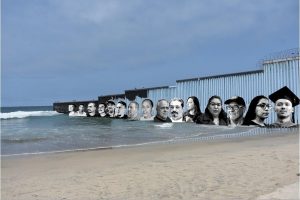 The Playas de Tijuana Mural Project poses the question: Who Counts as a Childhood Arrival to the United States? It portrays fifteen stories of childhood arrivals who remain undocumented in the US and those who have faced deportation to Tijuana, Mexico.

The mural is located on the beach at the westernmost point of the US-Mexico border in Playas de Tijuana, Mexico.

As part of their participation in the mural, the storytellers and allies painted the portraits at the Border Line Crisis Center in Tijuana. Their portraits are accompanied by Quick Response (QR) Codes that when scanned shows the testimony of migrants who have faced deportation and remain undocumented in the US. Together, the stories and portraits reflect the myriad of stories behind the United State’s Childhood Arrivals dilemma.

Lizbeth De La Cruz a Ph.D. Candidate in Spanish Latin American Literatures and Cultures in UC Davis. As a UC President’s Pre-Professoriate Fellow for the academic year of 2020-2021, she is writing her first book manuscript, which draws from her doctoral dissertation. Her dissertation centers on the concept of childhood arrivals to the United States and intends to draw attention to a range of ethical-oriented concerns regarding the legal treatment of this group. It develops the Childhood Arrivals Critical Theory (CACrit) framework, introduces a more general definition of this group, and coins the Childhood Arrivals Diaspora.

In Spring 2021 she is serving as a storytelling and media trainer consultant for Imagining America’s Leading and Learning Initiative (LLI) Stories of Change initiative. She continues her work with LLI as a graduate fellow engaging in co-facilitating a group with UC Davis graduate students who engage in activist-engaged related work.

Since February 2021, she is co-directing the installation of the Leave No One Behind Mural project – a collaboration with organizers and allies who are advocating for the return to the U.S. of deported U.S. military veterans, childhood arrivals, and family reunification. In December of 2020, she was awarded a fellowship to attend the 2020 Podcasting the Humanities Winter Institute hosted by the National Humanities Center and the Digital Humanities Center of San Diego State University.  ​In summer 2020, she was an Imagining America’s Leading and Learning Initiative Fellow and a Central Valley UCLA Law Fellow. ​​

​​​​​​​​​​Lizbeth de la Cruz is the daughter of immigrant parents from Mexico and the oldest of three siblings. Inspired by her teachers in elementary school, from an early age, she discovered her passion for learning and teaching. This led to the creation of Escuelita Ambulante in both California and Jalisco.​​

As her family relocated within the U.S. and Mexico during her childhood, Lizbeth would engage in teaching the neighborhood kids materials ranging from math, science, history, art, and literature. She also taught English as a second language to both youth and adults in her mother’s rural community in Jalisco, Mexico.  These experiences and others brought Lizbeth’s interests and the community together enabled a strong foundation that has shaped her activism and public service through engaged digital scholarship.

Lizbeth grew up in Compton, CA during her childhood and Fresno, CA in her late teen years. Her upbringing as a member of a mixed-status family formed her consciousness on the Immigrant Experience in the U.S.  As a first-generation latinx student, she values her privilege in earning a college education and is working on paving the road for others like herself to pursue higher education.