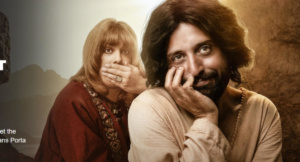 A new Netflix series is being criticized by religious groups and is demanding to be taken down from the streaming service.

More than 1.5 million people have signed a petition demanding that Netflix remove a Brazilian comedy special that features a homosexual Jesus Christ character.

The description of the series reads, “Jesus, who’s hitting the big 3-0, brings a surprise guest to meet the family. A Christmas special so wrong, it must be from comedians Porta dos Fundos.”

In “The First Temptation”, Jesus brings a special guest to meet his parents, Mary and Joseph. It is implied that Jesus and his male friend are in a sexual relationship.

The petition that is gaining traction on the site Change.org calls for the removal of the show. The petition reads:

“It is beyond imagination to see a business and a platform open to the general public not to give consideration to people of faith, “Christians” in particular in the production and distribution of this movie (THE FIRST TEMPTATION OF CHRIST), which is direct attack and ridicule on our faith, confession, and identity.

“Mocking and ridiculing Jesus Christ who is the author and anchor of our faith is by no means a satire. But, an anti-God and anti-Christian declaration with bold intention to make jest of biblical believes and falsify the standards widely uphold in our faith.

I, therefore, call on Netflix to take down this movie and call on all Christians to close their subscription and Netflix account as long as this movie remains on their platform.”