Peso Strengthens and Reaches its Best Level in Months

The currency trades at its best since Donald Trump’s victory.

The Mexican peso is at its best level against the dollar since Donald Trump’s November election victory. The delivery of remnants on the eve by the Bank of Mexico to the federal government, for a historical amount of almost 322 billion pesos, contributed to the Mexican peso to extend its rally and approach levels prior to the election of the United States, stated the Colef researcher, Alejandro Diaz-Bautista.

Among the major currencies in the world, the Mexican peso was the worst performing in 2016, when it depreciated 20% against the dollar, having its worst year since 2008, shaken mainly by the US presidential race and the unexpected triumph of the US real estate magnate and the uncertainty generated by Trump.

“The market is already discounting Trump’s twits, so we now see an appreciation of the Mexican peso against the dollar during 2017,” warned Dr. Alejandro Díaz Bautista, an economist, professor and research professor at the Northern Border College (Colef) As well as national researcher at Conacyt. 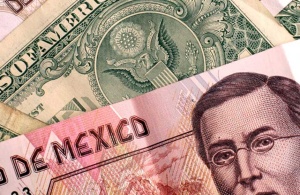 Since January 20, when Donald Trump took the presidency of the United States, the peso-dollar exchange rate has eliminated the loss of value it had accumulated, thanks to a greater confidence among investors that there will be a good settlement trade between Mexico and the United States.

The recovery of the Mexican peso is mainly due to the fact that the worst-case scenario was not expected from public policies proposed by Trump. It should be mentioned that the exchange rate of the dollar reached a historic high last January, when it was quoted at 22.05 pesos per unit.

Bancomer sells it at 19.26 pesos per dollar, while Citibanamex, Santander and Banorte do so at 19.00 pesos.

In the exchange houses of the International Airport “Benito Juárez” of Mexico City (AICM), the dollar registers an average price of 18.51 pesos to the sale and of 17.70 pesos to the purchase.

The foreign currency is offered in a maximum of 17.75 pesos and is acquired in a minimum of 17.10 pesos, in money-exchange stores at the border.