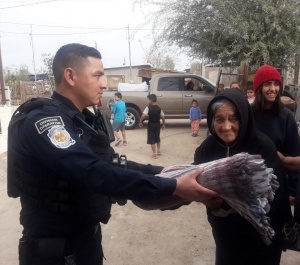 MEXICALI, BC- Last month, State Preventive Police, in addition to fighting crime, it has been vitally important to maintain close contact with citizens on all vulnerable population, which is why they went to the priority neighborhoods and provided blankets to mitigate the cold.

These actions were carried out through the Social Care Coordination of the corporation where elements went to the western neighborhoods of the city for which the community allies that participate in prevention activities were the way to locate these people.

Around 30 people were benefited who were given blankets, quilts, and pillows as support to cope with the low temperatures.

This type of activities will continue to be carried out throughout the State since the corporation also seeks to contribute to society to promote the human side in the agents and encourage them to strengthen the courage and commitment to be the police and work to serve the citizens.

One of the commitments through social attention is to strengthen meetings in communities to directly address and collect complaints on public safety and attack crime more effectively, as it has been done.

These actions were part of “Safe December” in the framework of the “Crusade for Safety, Task of All” headed by the Governor Francisco Arturo Vega de Lamadrid.