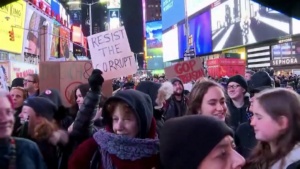 Several rallies against Trump are happening in multiple cities on the eve of impeachment vote and they are asking lawmakers to hold the president accountable for his actions.

As Democrats prepare to vote to impeach the President for abuse of power and obstruction of justice, millions of the President’s opponents are taking the streets in support of the impeachment hoping that this process will bring down a President they have opposed since day one of his term. Several cities around the U.S. saw that activity Tuesday night ahead of the vote.

This impeachment process will be the first bullet in a long war ahead of the 2020 election. The Democrats are still yet to choose their nominee while the President is firing up his base.

All the cards are on the table and the game is about to begin. Last time the United States saw an impeachment process that happened when Bill Clinton was President.

Trump, of course, is not staying quiet.

Trump told Nancy Pelosi in a 6-page letter that the impeachment represents an unprecedented and unconstitutional abuse of power by Democrat Lawmakers, unequaled in nearly two and a half centuries of American legislative history.

Trump told Pelosi that this nothing but a witch-hunt against him.