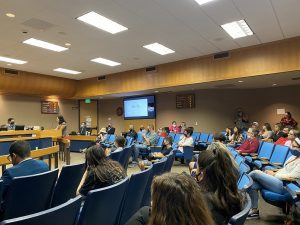 Tired and angry about mandates from state health officials and California Governor Gavin Newsom, a group of people in California are organizing themselves to keep their kids at home in a way of protesting mask and vaccine mandates.

During the last three weeks, a group of parents and concerned citizens have gone to the Imperial County Board of Supervisors meeting to demand that the Universal Mask Mandate the county be rescinded. They have addressed that it is a big risk for students to wear masks all day in school while others propose that they should focus on the treatment for COVID instead of following mandates.

Joining, a statewide movement, the group that now identifies as the Imperial Valley Parents and Teachers Against Mandates, is inviting parents that have children in elementary, middle school, and high school to not take their children to school on Oct. 18.

“Don’t Call Your Child In Sick-Say You Are Not Okay With The Vax (vaccine) Mandate,” the advertising reads.

Several reactions are being now published online for and against this movement.

“Because of the walkout, my school, and the other schools in my town, are ending school at 12:30 pm on the 18th, to minimize disruptions to our learning as they’re anticipating students to join the walkout,” a person wrote in Reddit on Oct. 13.

Another one of the concerns parents have brought up is the health concerns with children that wear a mask. One of the people that have gone to the county board meetings is Robin Cartee who posted this on her Facebook page. Since its publication, the post has been shared 460 times making it something of public domain.

“I had asked our County Health Department more than once to please provide us with information showing that the masks our children wear all day are sanitary and safe for them to wear. I did not receive anything back from them other than oxygen and carbon dioxide studies. So I decided to try to find out for myself. I contacted Dr. Tyson and he said to bring him ten masks and he would send them off for testing. I was able to get nine masks to him. We received back the lab reports yesterday. Two of the nine masks had moderate amounts of Streptococcus Pneumoniae Bacteria on them. Dr. Tyson said that this means the bacteria rests on the masks all day long while the child inhales the bacteria. This can cause a range of different illnesses including sinusitis, otitis media, pneumonia, bacteremia, osteomyelitis, septic arthritis, and meningitis.

In addition, one of the masks had a HIGH amount of fungal bacteria. This fungal bacterium is called Mucormycosis (also known as black fungus). From the CDC website…”Mucormycosis is a serious but rare fungal infection caused by a group of molds called Mucormycetes. These fungi live throughout the environment. They live in soil and decaying organic matter, such as leaves, compost piles, or rotten wood”.

In researching this fungus, I discovered that it is normal to come in contact with small amounts of these spores. However, this student had a high amount (25,000,000) on their mask that they inhaled all day long.”

While this statement regarding Streptococcus Pneumoniae Bacteria has not been confirmed as an actual problem, this is part of a new robust debate going on in the Imperial Valley. The County Board of Supervisors decided to revisit the mask mandate and see if the COVID-19 trends justify removing the universal mask order that was signed by Imperial County Health Officer, Dr. Stephen Munday.