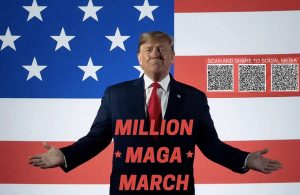 As the nation continues to be divided about the outcome of the election, many are planning to go to Washington D.C. to either support President Donald Trump or demand that he leaves and admits his defeat.

It’s been a week after the presidential election and Trump has still not conceded defeat even after Joe Biden won the popular vote and the electoral college. Trump says there was border fraud and demands a recount.

Supporters of the President are planning rallies in D.C. on Saturday as the country waits for the Trump campaign to submit evidence for unfounded claims of voter fraud.

One of the rallies is called the “Million Maga March,” according to the group on Twitter. And another is called, “Stop The Steal.” Both of the planned rallies will be held on Saturday starting at noon.

A growing number of Trump supporters believe Trump’s claim that the election was rigged, even though elections officials, many of whom are Republican, said the allegations are both unfounded and untrue.

Right-wing conspiracy theorist Alex Jones was among hundreds of pro-Trump protesters rallying at a vote counting center in Arizona where he encouraged others who believe the president’s claims that the election has been rigged to travel to Washington, D.C., and defend the White House.

“Everyone who can need to go and surround the White House and support the president,” Jones told protesters Friday in Phoenix.

President Trump will hold a series of rallies to build support for the legal fights challenging the outcome, campaign spokesman Tim Murtaugh confirmed on Sunday.

More Anti-Trump events are also planned where people are going to ask him to leave office.