As we write in advance for the radio, in the so-called Third Presidential Debate, which should be called stricto sensu, debate of candidates or aspirants to the Presidency of the Republic or debate for the Presidency, it is to be noted that again the one marking the agenda was the candidate of the Alliance “Together We Will Make History”, Andrés Manuel López Obrador, by imposing corruption as the main and recurring topic.

To such a degree was the pressure, that while the Tabascan based his social proposals on the financing with the money that would be recovered and now squandered by the drains of corruption, the other two candidates, Ricardo Anaya Cortés and José Antonio Meade Kuribreña, who fought hard for the second place, also again engaged in hitting the pointer with arguments that did not convince anyone and rather seemed out of some wizard’s trick. 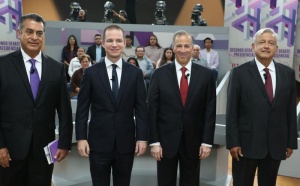 And not only that, in that same tenor, they again attacked each other, the standard-bearers of the alliances: “For Mexico to the Front” and “All for Mexico”, to such a degree, that the first insisted that, if reaching the Presidency, he will put Enrique Peña Nieto and all his “corrupt” collaborators in jail.

To which the second, directly snapped the PAN candidate saying: “Ricardo: the only suspect of all it’s you”, referring to the accusations of money laundering in which he has been indicated with respect to the purchase and sale of an industrial broker in Querétaro.

With this stuttering of mutual attacks to place themselves in second place, in the supine idea, that from that position it will be easier to beat López Obrador, they lost the last chance to be forceful to win the election.

With regard to Jaime Rodríguez Calderón, “El Bronco”, who we don’t even feel like mentioning, first because he managed to be a candidate through a false door and has no chance of victory in the race; he barely managed to launch himself against the other two.

To all the above, Andrés Manuel López Obrador, in response to the repeated attacks from the PAN and the PRI candidates, he finished with a lapidary phrase: “It’s not my fault that they are tied down … we’re 30 points apart”.

Finally, it is worth recognizing the magnificent performance of the moderators: Carlos Puig, Gabriela Warketin and Leonardo Curzio, whose questions were true darts or accurate censures to the latest neoliberal governments.

Journalist and writer; President of the National Association of Graduates in Journalism, CONALIPE; Secretary of Social Development of the Latin American Federation of Journalists, FELAP; Founder and honorary president of the Federation of Mexican Journalists, FAPERMEX, member of the Standing Advisory Council Club “Primera Plana” and Professor of the National Academy of History and Geography, ANHG. I appreciate your comments and criticism teodoro@libertas.com.mx, teodororenteriaa@gmail.com. We are heard at frequencies throughout the Republic of “Libertas Radio”. We invite you to visit: www.felap.info, www.ciap-felap.org, www.fapermex.mx, and www.clubprimeraplana.com.mx