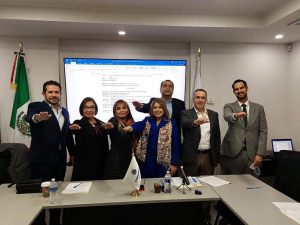 In a meeting held on Monday, December 13, 2021, Octavio Sandoval López was re-elected by unanimous votes, as President of COPARMEX Mexicali, for the year 2022.

He is accompanied on the board of directors as Vice President, José Manuel Salcedo Sañudo, as Secretary, Andrés Daniel Ruelas Yáñez, and as Treasurer, Bertha Araceli Morales Mercado.

In his message as reelected President Sandoval López, he presented the work program for the year 2022, which was approved by the Directors based on six guiding axes that are a continuation of the program developed in 2021 and which are: 1) Rule of Law and 2) Legal Security, Public Security, and Justice as a basic condition for development and social coexistence; 3) Training to facilitate the way of doing business; 4) Substantive Equality and Inclusion; 5) Transparency and accountability of the government, and 6) State Anti-Corruption System.

Sandoval López pointed out that, before the beginning of a new State Government, COPARMEX, as it has always done, will work with the new Government making proposals to achieve the economic development of our City and contributing so that the Government, both the State and the Municipal achieve their objectives for the benefit of citizens.

Within the guiding axes, it will be essential to monitor the reinstatement of the State Anti-Corruption System, as a fundamental tool for transparency and accountability and an effective fight against corruption.

As regards the Rule of Law and Legal Security, follow-up will be essential to banish the governance practices of the administration of Jaime Bonilla Valdez, characterized by arbitrariness, arrogance, and corruption; as has already been pointed out even by the new government.

He said that COPARMEX will continue to be the voice of those who have a voice but are not heard, and will continue to recognize what is well done without renouncing the legitimate right to signal when citizens are negatively affected, but above all the businessmen belonging to this union.

Finally, he pointed out that they will be very punctual in monitoring the strategy to contain the levels of insecurity that the new government will implement, it will be one of the priorities because we already want results and we cannot live in uncertainty and with those intolerable levels of perception of insecurity and impunity, as the President of the Republic himself pointed out in his recent visit to our State when he pointed out that our state ranks first in the country in vehicle theft and second in homicides.