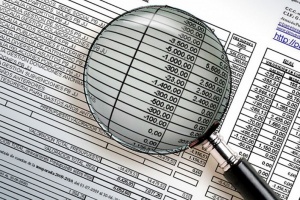 The OBSERBC recently sent us its analysis of  Financial Statements for the Government of the State of Baja California from 2013 to 2017 and 2018 Budget, for which the state’s citizens organization presented a recognition to the governor Francisco Vega de la Madrid, for his willingness and commitment in the area of transparency and accountability, as well as for providing all the information to streamline the work of OBSERBC in its research within the Department of Planning and Finance of the state.

In its aim to continue informing the public about the destination of public resources, the Citizen Observatory of Baja California conducted the Analysis of the Financial Statements for the Government of the State of Baja California from 2013 to 2017 and its 2018 Budget.

The main purpose is to continue with the analysis of the Financial, Budgetary and Accounting information of the Government of the State of Baja California. 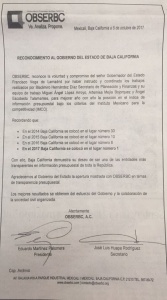 This is because the population of Baja California is concerned about the lack of transparency in the use of public resources, as well as the clarity in the rendering of accounts. An adequate financial management of the Public Finances of the State directly related to the quality of life of its citizens (environment, education, infrastructure, security, health and economic development).

In the development of this analysis, they’ve tried to use a simple and technical language, using the graphical tool as a central element for the review of income (year with year increases) but in the administration of expenditure. Finally, there is not enough resource is not spent adequately.

The conclusion in this analysis is that an alert should be placed to rectify erroneous or badly planned decisions and that the Government’s State Policies are those that really allow a better life standard for Baja Californians. 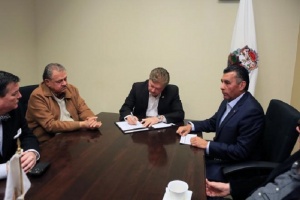 The information analyzed was obtained from the Transparency Portal of the Government of the State of Baja California in order to avoid generating discrepancies in the available information sources.