Objectives and Topics to Renegotiate in NAFTA

The government of Donald Trump sent Congress the list with the subjects that they intend to adjust in the negotiation with Mexico and Canada. Robert Lighthizer, United States Trade Representative, published a detailed and exhaustive summary of the negotiating objectives for the renegotiation of the North American Free Trade Agreement or NAFTA.

“In addition to reducing the trade deficit, the government of President Trump wants to include in the agreement a chapter on digital economy, strengthen environmental and labor obligations, and amend the rules of origin so that a greater volume of the exchange are products of United States, “said Dr. Alejandro Díaz Bautista, an economist, national researcher at Conacyt, as well as a research professor at the Northern Border College (Colef).

The new NAFTA objectives, a requirement to begin negotiations on updating the agreement over the next 30 days, contain the first specific points of the Trump government. With this renegotiation of NAFTA, Donald Trump’s Administration will seek a “much better deal that will reduce the US trade deficit and be fair to all Americans by improving access to the Canadian and Mexican markets for manufacturing, agriculture, and United States services,” says the Summary of Objectives for renegotiation of NAFTA.

The document states that, since NAFTA was implemented in 1994, the bilateral trade balance of US goods with Mexico went from a surplus of 1,300 million dollars (mdd) to a deficit of 64,000 million dollars in 2016. 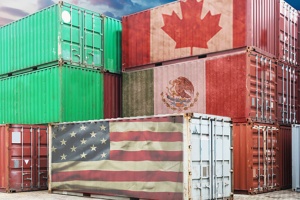 Negotiation objectives also include adding a digital economy chapter and incorporating and strengthening labor and environmental obligations that are currently in the NAFTA side agreements.

In addition, among other objectives, the US government “will work to eliminate unfair subsidies, practices that distort the state-owned enterprises market and heavy restrictions on intellectual property.”

Lighthizer says that “President Trump continues to deliver on his promise to renegotiate NAFTA to achieve a much better deal for all Americans.” Below is a summary of the 22 points that Donald Trump wants to renegotiate in NAFTA, according to the Summary of Objectives of NAFTA’s renegotiation.

While Ernesto Cordero, a PAN senator and former finance minister, stressed that the Mexican Senate will not ratify a North American Free Trade Agreement (NAFTA) in which trade disputes will not be clearly established, which is specified in Chapter 19 of the current treaty.

For Senator Cordero Arroyo, accepting the United States’ claim to eliminate Chapter 19 of NAFTA would lead to disputes over antidumping, undervaluation and safeguards to be resolved in accordance with US law, so the Secretary of Economy should reject it.

Let’s recall that Chapter 19 allows Mexico, Canada or the United States to challenge trade remedy measures, such as antidumping quotas or countervailing duties for prohibited subsidies. The United States agreed to this right only in NAFTA, without reproducing it in any of its other free trade agreements.

MEXICALI, B.C.– The INDEX Association of the export industry in Mexicali, held the 2021 Golf …