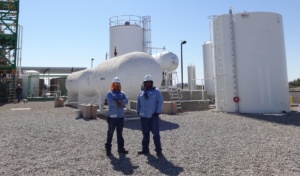 The Imperial Valley has become a place where renewable energy projects want to invest.

Oberon Fuels is one of those companies that decided to invest in Imperial Valley and have a facility that employs local people.

“We decided to be in the Imperial Valley because we saw its natural resources, agriculture, and the workforce they have,” Rebecca Boudreaux, Ph.D., President. “They have a great workforce that is ready to work.

In 2013, Oberon Fuels’ pilot plant in Brawley, California, produced the first fuel-grade DME in North America, which has been used by Volvo Trucks, Mack Trucks, and Ford Motor Company for vehicle demonstrations around the world.

Recently, the company added five full-time, living-wage positions in operations at the plant in Brawley where the county unemployment rate is more than 25%; the company seeking to fill four additional positions.

The expansion is a result of collaboration with SHV Energy and a $2.9 million California Energy Commission grant.

The company still has three openings for Plant Operator as well as an opening for a Plant Supervisor. All of these positions are essential workers under Governor Newsom’s stay-at-home executive order issued last March in response to the COVID-19 pandemic.

The plant is undergoing an upgrade that will allow it to produce low carbon fuel made from dairy waste. Funding for the plant expansion came both from the state of California as well as through an investment from SHV Energy, the world’s largest distributor of propane.

Oberon Fuels is a company that develops a range of ultra low-carbon or carbon-negative fuels that are practical, economical, and sustainable alternatives to today’s fossil fuels that can be produced from a variety of waste streams. Their approach reduces emissions while creating new economic opportunities for our partners.

The company was awarded in 2019 a grant for $2,876,139 from the California Energy Commission for a first-of-its-kind, multi-phase project to produce the first renewable dimethyl ether, a clean-burning, ultra-low-carbon transportation fuel, in the U.S. This project unlocks the near- and medium-term decarbonization benefits of rDME, an economical fuel and key step in the development of California-based, renewable hydrogen (rH2) pathway to zero-emission mobility.

“Assemblyman Eduardo Garcia and Senator Ben Hueso have been very supportive of the project,” Boudreaux said. “Having this funding is important when you are innovating in alternative fuels and energy.”

Boudreaux thanked the Imperial Valley Economic Development Corporation for their help in connecting them to the Workforce Development Office.

“We see expanding our services and helping improve the environment in Imperial Valley in the next three years and continue to support the community by tapping into its talented workforce,” Boudreaux said.