NOTHING TO CELEBRATE AND MUCH TO DEMAND

On the eve, we remember the “Press Freedom Day”, which for journalists in the world in general and in Mexico in particular, has ceased from decades to be a day of celebration to become only a painful commemoration, therefore again, it is reiterated that for the union we have nothing to celebrate, however much to demand to the authorities regarding the respect of those primary freedoms and unrestricted compliance to ensure the physical integrity of the messengers.

From everywhere in the Mexican Republic, there were demonstrations by members of our leading organizations: Federation of Mexican Journalists Associations, FAPERMEX, and the National College of Graduates in Journalism, CONALIPE, from our president, Juan Ramón Negrete Jiménez, when he expresses from his native Colima that we have all his personal and institutional support in the face of all kinds of aggressions, from threats and displacements to murders and forced disappearances; the Presidency of the academic entity in the Capital of the Republic pronounces its commitment as well.

In the city of Cuernavaca, in front of the monument dedicated to Freedom of the Press, the Association of Journalists and Communicators of Morelos, APECOMOR, chaired by Master Teodoro Raúl Renteria Villa and the National Association of Broadcasters in Mexico, chaired by Professor Rosalía Buaún Sánchez, together with the Civic Citizen Council headed by the professor and graduate, Pablo Rubén Villalobos Hernández, after months of intense historical research work so that the Freedom of Expression Walk in that same space was inaugurated today, an austere ceremony without guests due to the pandemic that afflicts us all, but in a significantly more compelling way, the plaques were presented, in which the names of deceased journalists, broadcasters and media entrepreneurs of national significance are kept forever.

Of course, the one that recalls the journalists from Morelos who undertook the trip to the eternal ether from June 7, 2019, to this day, among them, the always mourned: Octavio Raziel García Ábrego, Fernando Diez de Urdanivia, and Miguel Ángel García Tapia were revealed. 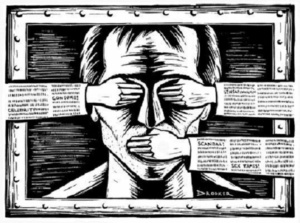 In the act, the aforementioned leaders, plus the municipal president of the capital city, Francisco Antonio Villalobos Adán, agreed in their demand to stop violence against journalists by authorities and civilians and demanded that the Approved Investigation Protocol of Crimes committed against Freedom of Press is effectively applied.

The President for life of FAPERMEX and Secretary-General of CONALIPE, teacher María Consuelo Eguía Tonela, from Mexicali, Baja California, in her speech referred in the same terms.

In Querétaro, through the Televisa Broadcast, our assistant secretary-treasurer, teacher Arnulfo Domínguez Cordero, according to the owner, Carlos Ravelo y Galindo, as many colleagues, detailed the tragic figures that have us permanently mourning: so far in the current federal regime, there are 22 murders: 16 journalists; among them two women; 3 radio hosts, including a woman; 2 press workers, and 1 family member.

Consequently, from 1983 up to date, according to the permanent monitoring of the organized journalistic union, there are 326 murders, of which the following have been victims: 281 journalists; 6 radio hosts; 12 press workers; 15 relatives and 10 friends of communicators, and 2 civilians; as well as 28 enforced disappearances pending clarification.

At the ceremony in Cuernavaca, Morelos, special reference was made to the Court’s decision to protect free expression, in the sense that the misuse of language is not a reason for any type of penalty and, of course, to continue our fight, of almost two decades, so that the Government Advertising Equity Law can be approved, in this sense that said right is not left to the personal decision of the President of the Republic, governor or mayor in turn.

I greet among other colleagues who have spoken about Adriana Tavira from the State of Mexico; Shaady Nolasco from Ensenada, Baja California; to Adrián Rangel from Guadalajara, Jalisco; José Alfredo Ochoa and José Manuel Velarde de Sonora; Alejandro Álvarez Manilla from Mexico City; Felipe Sánchez from Oaxaca; Óscar Alvizo Olvera from Tamaulipas; José Prisco de Toluca; Eva Guerrero from Sinaloa; Guadalupe Alejandra Galindo de Puebla; Ovidio Reyes de Chiapas and many others who fight for our ideals and claims.

In conclusion, on Freedom of the Press Day, which was thus born, or Expression, as it is now known, the substance is that WE HAVE NOTHING TO CELEBRATE AND YES, MUCH TO DEMAND.

Journalist and writer; President of the National College of Journalism Graduates, CONALIPE; Secretary of Social Development of the Latin American Federation of Journalists, FELAP; Founding President and an honorary life member of the Federation of Associations of Mexican Journalists, FAPERMEX, member of the Permanent Advisory Council of the Primera Plana Club, Doctor Honoris Causa from the International University and Full Member of the National Academy of History and Geography, ANHG. I will appreciate your comments and criticism at teodoro@libertas.com.mx, teodororenteriaa@gmail.com.We hear each other on frequencies throughout the Republic of Libertas Radio. We invite you to visit: www.felap.info, www.ciap-felap.org, www.fapermex.org, and www.clubprimeraplana.org and the website www.libertas.mx